Our sun just set a record for spotlessness: In 2019, the sun has been without sunspots for more than 270 days: Some scientists are predicting we are entering a mini-ice-age (what do you think?)

Solar Minimum has just become very deep indeed. With weather records being smashed all over the world this year, our Star has jumped on the bandwagon too. Last weekend, our sun, set a space-age record for spotlessness (quietness).
So far in 2019, the sun has been without sunspots for more than 270 days, including the last 33 days in a row ( which is 77% of the time this year). Since the Space Age began, no other year has had this many blank suns. The previous record-holder was the year 2008 when the sun was blank for 268 days. That was during the epic Solar Minimum of 2008-2009, formerly the deepest of the Space Age. Now 2019 has moved into first place.
A mag 6.3 in the Atlantic could be a precursor to heavy seismic and volcanic activity after a cavernous hole on our sun spews solar wind toward earth's magnetosphere 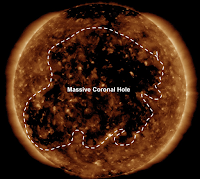 A mag 6.5, reduced by USGS to a mag 6.3 near the North Ascension Island, Atlantic Ocean is the 3rd major quake of a very quiet October, which brings the 2019 total to 112, see USGS map below.  The earthquake did not generate a tsunami.
We can expect more major seismic activity in the coming days as a massive coronal hole is spewing huge amounts of solar wind toward the Earth's magnetosphere from our sun causing geomatic storms which are known to cause seismic and volcanic activity.
This hole (properly called a "coronal hole") is an old friend. It has been spinning around with the sun for more than 4 months, strobing Earth with solar wind at approximately 26-day intervals.

Authorities in the Cape Verde islands off West Africa are waiting for experts from Spain to help determine why more than 100 dolphins died on a local beach. Local media report that around 200 melon-headed dolphins were found on a beach on Boa Vista island on Tuesday. Officials, residents, and tourists managed to drag some of them back out to sea, but many returned. Bulldozers buried 136 dead dolphins. BIOS Cape Verde, a volunteer environmental association in the former Portuguese colony, said on its Facebook page Friday it took samples from 50 dolphins and four others were placed in deep freeze by the local council. The group said veterinarians from the University of Las Palmas in Spain's Canary Islands are due in the coming days to perform tests.
"Something's going on up there!" Strange sunsets are being witnessed around the world as the Arctic burns: "Worst Arctic wildfires in 10,000 years!"

Photo credit: Heiko Ulbricht of Saxony, Germany
"Burn baby burn-when we gonna learn?"
Strange sunsets are being witnessed around the world as the Arctic burns.
The sweltering Arctic is ablaze, wildfires are ravaging the Arctic, with areas of northern Siberia, northern Scandinavia, Alaska and Greenland engulfed in flames.
Vast areas of Alaska Greenland and Siberia are literally on fire with Alaska alone burning 1.6 billion acres this year.
Right now in Siberia alone, more than 2 million hectares are ablaze, making it one of the worst Arctic wildfires in 10,000 years.
NASA dumped trimethyl aluminium (TMA) and a barium/strontium mixture into the magnetosphere Friday (don't worry it's perfectly safe!)

According to NASA, which funded the mission, on Friday night two rockets dumped trimethyl aluminium (TMA) and a barium/strontium mixture into the magnetosphere above Norway.
NASA claimed, "the chemicals pose no hazard to residents in the region."
But what was the purpose of the experiment?
According to NASA, the experiment was to measure winds and currents in the ionosphere, an electrically charged layer of the Earth's atmosphere where auroras appear. Specifically, the researchers are interested in discovering how auroral energy might percolate down toward Earth to influence the lower atmosphere.
The Sun awakes! Despite our Sun is now into Solar Minimum sunspot AR2736 stretches more than 100,000 km and is releasing CMEs toward Earth

Three days ago, sunspot AR2736 did not exist but now stretches more than 100,000 km across the Sun and is growing rapidly.
Despite the fact, our Sun is now into Solar Minimum, sunspot AR2736 has spat out 10 C-class solar flares in the last two days.
According to Spacweather.com, sunspot AR2736 has a complicated magnetic field that is crackling with C-class solar flares.
Sunspots are islands of magnetism floating on the surface of the sun.
Most sunspots, like most magnets, have two poles + (N) and - (S). Sunspot ARorio2736, however, has multiple poles with areas of + and - jostling against one another.
2019 more signs and wonders! The brightest star in the night sky Sirius will disappear briefly on Monday eclipsed by asteroid 4388 Jürgenstock

Photo Sirius, credit Wikipedia
More signs and wonders, the brightest star in the night sky, Sirius will disappear briefly on Monday, February 18th, when the asteroid 4388 Jürgenstock will eclipse it for a couple of seconds.
According to the Weather Channel, it will be the first time Sirius has been blacked out.
The asteroid is sweeping around the sun and will come between Sirius and Earth on Monday, on Feb. 18th between 09:11 pm PST and 09:27 pm PST.
Western Mexico, Central US and Canada will be able to witness Sirius "disappearance."
BOOM! Solar Minimum Flare releases energy of a billion WWII atomic bombs as C5-class solar flare is biggest since Oct 2017

Credit: SDO/HMI
We are into Solar Minimum but our Sun is still producing solar flares...
Yesterday, Jan. 26th at 13:22 UT, the magnetic canopy of sunspot AR2733 exploded, producing the strongest solar flare since the M1.1 way back in October 2017.
NASA's Solar Dynamics Observatory recorded this extreme ultraviolet movie of the explosion: This is a C5-class solar flare. In a matter of minutes, it released about as much energy as a billion WWII atomic bombs.
According to Spaceweather.com, that sounds intense, but... On the sun such explosions are considered to be relatively minor.
X-class flares common during Solar Maximum are hundreds of times stronger.
Right now, however, the sun is in the pits of a deep Solar Minimum, which makes a C5-class flare temporarily noteworthy.
The explosion did not hurl a CME toward Earth.
A must see and could be the last chance for many in the UK and Western Europe to see this Phenomenon "Super Wolf Blood Moon"

Image NASA
I'm the idiot who dragged himself out of bed this morning at 5: am to see the Super Wolf Blood Moon only to realise I was a day too early!
It will be the last chance for skywatchers in the UK and Western Europe to see a total lunar eclipse in its entirety until 2029 which means it is probably the last chance for many to see.
According to Spaceweather.com, it's going to be super.
On Sunday evening, Jan. 20th, at 8:41 pm PST (11:41 pm EST) the shadow of our planet will engulf the full Moon, transforming the grey lunar disk into a coppery-red orb.
The eclipse will be "super" both figuratively and literally.
3 of the 4 most recent Solar Minimum years have been in the top ten warmest years ever recorded suggesting mini ice age will not happen

The sun has been without spots for 7 straight days in this new year, a sign that Solar Minimum conditions are in effect, according to Spaceweather.com.
On the 27th of June 2018, NASA announced a new Solar Minimum is coming, every 11 years sunspots fade away, this event is called a Solar Minimum and this is happening now with 2019, 2020, expected to be the quietest period.
Some experts believe sunspot activity is as low as the mid-1600s when low sunspot activity is thought to have caused a mini ice age, temperatures around the world would suggest that is not going to happen this time, however.
A large effect on the Earth's atmosphere.