Wildfires in the Brazilian Amazon rainforest hit record number of 72,843 fires, an increase of 83% compared to 2018 - the highest since records began 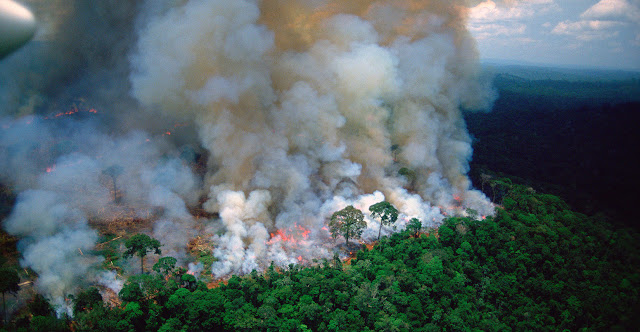 Wildfires in the Amazon rainforest have hit a record number this year, according to research carried out by Brazil's space research centre (INPE). It cites 72,843 fires, marking an increase of 83% compared to 2018 - the highest since records began in 2013. Since Thursday, INPE said satellite images spotted 9,507 new forest fires in the country, mostly in the Amazon basin, home to the world's largest tropical forest, which is seen as vital to countering global warming.

Images show the northernmost state of Roraima covered in dark smoke. In Sao Paulo on Monday, the smoke caused a blackout in the city which lasted about an hour. It was after strong winds brought in smoke from forest fires burning in the states of Amazonas and Rondonia, more than 2,700km away

An emergency was declared in the south of the state and in its capital Manaus on August 9 as a result of fires. Acre, on the border with Peru, has also been on environmental alert since Friday. Moreover, wildfires have increased in Mato Grosso and Para, two states where Brazil's agricultural frontier has pushed into the Amazon basin and spurred deforestation.

Wildfires are common in the dry season but are also known to be deliberately set off by farmers illegally deforesting land for cattle ranching. It comes as concerns grow over right-wing President Jair Bolsonaro's stance on the environment. He took office in January and had vowed to develop the Amazon region for farming and mining, ignoring international concern over increased deforestation. In response to this latest data, Bolsonaro brushed it off and said: "it was the season of the queimada" when farmers use fire to clear land.

"I used to be called Captain Chainsaw. Now I am Nero, setting the Amazon aflame," Reuters quoted. Only last month, he accused the INPE director of lying about the scale of the problem - following that, he was sacked over the row. "I am waiting for the next set of numbers, that will not be made up numbers. If they are alarming, I will take notice of them in front of you," Bolsonaro told reporters. However, the INPE agency's reliability has been defended by scientific institutions, including the Brazilian Academy of Sciences. People have also been posting about the issue on Twitter using the hashtag #PrayForAmazonia to try to raise more awareness.