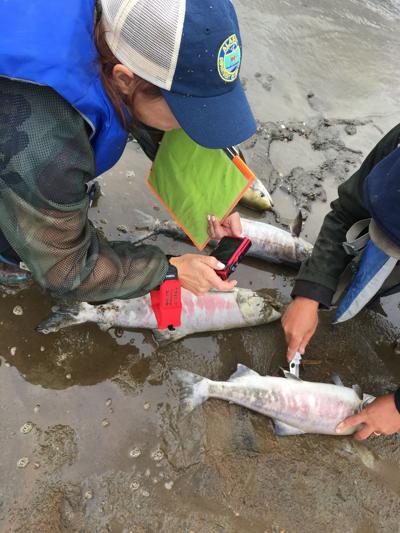 Photo newsminer.com
From the Koyukuk River to the Kuskokwim, to Norton Sound, to Bristol Bay's Igushik River, unusually warm temperatures across Alaska this summer led to die-offs of unspawned chum, sockeye, and pink salmon. Warm waters also sometimes this summer acted as a "thermal block" - essentially a wall of heat salmon don't swim past, delaying upriver migration. Stephanie Quinn Davidson, the Director of the Yukon Inter-Tribal Fish Commission, took a team of scientists along 200 miles of the Koyukuk River to investigate a die-off of chum salmon at the end of July. The team counted 850 dead, unspawned chum - and that, she said, was a minimum count. "We were boating, going about 35 or 40 miles per hour, and we know we missed a lot," she said. "On a boat going by relatively fast, we were probably getting at most half the fish and at the least about ten per cent of the fish." Locals to the area said this same thing happened four or five years, ago, she said, but not to the scale it did this year. She attributes the deaths to heat stress. "We cut open the fish, looked for any size of disease, infections, parasites.... By all indications, these fish looked healthy," she said. "They didn't have any marks on them, or any sign of disease or stress otherwise. And the die-off event coincides with the week of heat we had."

The total run was more than 1.4 million chum, she said, with some arriving before the warm weather event. "We definitely had chum salmon spawn," she said. "And have chum salmon continue to make it to spawning grounds. There are salmon that made it through. Hopefully, they'll pass those genes on that allowed them to persist." In the Kuskokwim, according to KYUK, there was a die-off of salmon having "heart attacks" due to the warmer than usual water along the ocean. In Norton Sound, large numbers of pink salmon were observed dead before spawning, according to KNOM.

Conservation organization Cook Inletkeeper put out a release July 10 noting that on July 7, stream temperatures on the Deshka were 81.7 degrees Fahrenheit - more than five degrees above the previous highest-recorded temperature in that location, according to science director Sue Mauger. In the Deshka, the warm water created a thermal block that prevented the salmon from moving upstream. Mauger said she and others are in the middle of an intensive five-year temperature survey on the Deshka to figure out the location of the river's cold waters, which could serve as refuges during climate change. "We have so many different types of systems (in Alaska) with different hydrologies," Mauger said. "Some are fed by glaciers, some by snowpack, some by groundwater... and the joy of salmon is how diverse their life histories are, to capitalize on all that different habitat... but when you're hitting temperatures in the 80 degrees, there are no doubt fish are in a high stress, and if they're surviving they must be hitting cold water refugia."

Even Bristol Bay, which experienced its second-highest harvest of sockeye salmon ever, at 43.1 million, experienced at least one die-off. Nushagak/Togiak Area Management Biologist Timothy Sands said there was a large die-off of sockeye on the Igushik River. After hearing reports, he received a video from a boater around July 20 of dead, unspawned sockeye lining the banks of the river. He has seen a thermal block in that river prevent salmon from migrating upstream before, in 2016. That's what the problem was this year, he said. "They couldn't go upriver because it was too warm and the water didn't contain enough oxygen, so they died," he said. "The warmer the water gets, the less dissolved oxygen is in the water." University of Washington Professor of Aquatic and Fisheries Sciences Daniel Schindler noted that in addition to warm water containing less oxygen, it increases salmon's metabolisms and need for oxygen, creating a "double whammy."

Juneau-based research scientist for the University of Montana Chris Sergeant co-wrote a paper on warm, crowded, low waters' effect on salmon. In essence, warm, low water plus large populations of salmon can lead salmon to suffocate. Climate change will lead this kind of thing to happen more frequently, Sergeant said, especially in snow-fed systems like the Igushik. Bristol Bay experienced an early spring, Sands said, so though there was "a fair bit of snowpack," that snowpack melted early, meaning it wasn't there to cool the river in June. The Igushik was also particularly affected because of its geography, Sands said. "I've described it as a long pond," he said. "The tide goes more than halfway up the river to the lake. It's very slow-flowing, very muddy. When it was really sunny out, it just heats up that river faster." Though Sands doesn't have estimates of the actual number of fish that died, based on the set netter catch rate he said between 200,000 and 300,000 were in the river during the warm water event that killed the salmon there. A small amount of fish - he estimates between 500 and 700 - made it up to the spawning grounds during the thermal block, but most of the escapement goal was met from fish that swam upriver afterwards. The die-offs "are happening around the state and seems to have coincided with that week of really warm, warm temperatures," Quinn-Davidson said.