Global worry as wildfires escalates across the lungs of the world: Thousands of wildfires are ravaging the Amazon rain forest along with Indonesia and Siberia 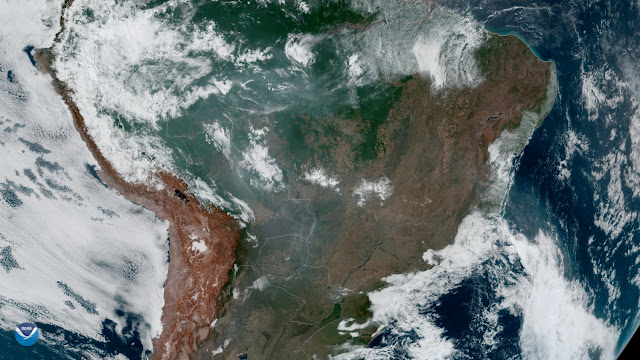 As thousands of wildfires are ravaging the Amazon rain forest, the global concern is rising as the lungs of our world, which produce almost a quarter of the planet's oxygen has caused the French President Emmanuel Macron to claim the wildfires are an international crisis.

The U.N. Secretary-General António Guterres tweeted: “In the midst of the global climate crisis, we cannot afford more damage to a major source of oxygen and biodiversity. Amazon must be protected.”
In the last eight days, almost 10,000 fires have ripped through Brazil's dense rainforest and activists claim most of them will have been set by men working in the jungle, clearing land for cattle and logging.
In the middle of the afternoon on Monday, the Brasilian city of Sao Paulo suddenly descended into darkness, it was as if day had turned into night as smog from the fires descended onto the city with a population of more than 12 million.
Last week, NASA released satellite images which depicted large swathes of Brazil, Paraguay and Bolivia affected by the fires and smoke.
According to the BBC, The official figures show more than 75,000 forest fires were recorded in Brazil in the first eight months of the year - the highest number since 2013. That compares with 40,000 in the same period in 2018.
Meanwhile, As fires rage in Brazil's Amazon rainforest, the south-east Asian nation of Indonesia is witnessing a similarly devastating ecological tragedy unfold.
The dry season has arrived in Indonesia - home to some of the world's oldest tropical forests - bringing with it its worst annual fire season since 2015.
Close to 700 hotspots have been identified in fire-prone regions in Sumatra, Kalimantan and the Riau Islands. They are often considered to be the planet's most bio-diverse places but large swathes are being destroyed in the name of large-scale commercial efforts.
According to Severe Weather Europe.com, the fires in the Amazon Forest continue, across the world in the northern hemisphere, severe forest fires are also raging in Siberia. Just like the Amazon, Siberia also has its own fire season, which varies in intensity from year to year, depending mostly on the weather conditions, such as temperature, humidity, winds and precipitation (rain/snow). The main source of about 60-70% of forest fires in Siberia, in violation of fire safety rules by people, while in the forest. There are also speculations that some people are causing fires intentionally, to conceal their illegal logging activities. This year, the fires are especially widespread, thanks to the supportive weather conditions.
Since the area is so wast, Russia accepted a special policy when it comes to forest fires. Basically, the policy says that the remote forest fires should be left alone to burn out if the economical cost of extinguishing the fire is greater than the economic value of the material burned. So unless the forest fires are threatening human property, infrastructure and lives directly, they are left to burn. Unless the economic value of the material burned by the fire is greater than the cost of extinguishing it.