"Throwing cold water on extreme heat hype," Just what are we to make of the weather? 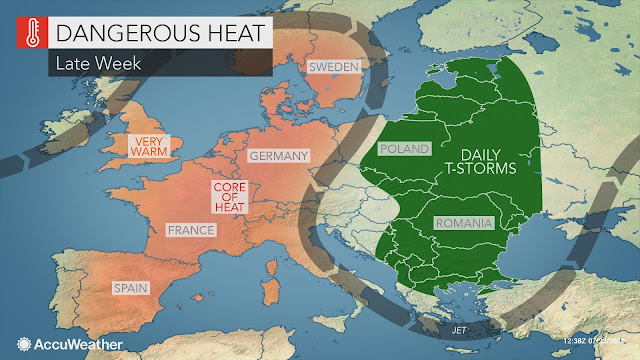 The record-breaking week in July...Credit Accuweather

Dr Joel N. Myers, AccuWeather Founder and CEO posted a very interesting piece on his website yesterday which got me thinking.

His post, "Throwing cold water on extreme heat hype," explained why he thought naming heatwaves in the same manner we name winter storms was a bad idea.

He claimed average temperatures have been higher in recent years but there is no evidence so far that extreme heatwaves are becoming more common because of climate change, especially when you consider how many heatwaves occurred historically compared to recent history.

Three days earlier than the French record above, the UK recorded their hottest day ever at 38.7 deg C (101.7 deg F) Cambridge, Cambridgeshire

The same week in July hundreds of locations across Europe smashed all-time hot weather records by an impressive margin with many locations beating records placed the day before.

Alaska saw a dramatic surge, with the heat smashing previous records in several cities.In Anchorage, the mercury stayed above 26C for six days in a row, doubling the previous record.Wildfires have raged across the Arctic with millions of hectares burning in northern parts of Russia.India has suffered heatwaves and severe water shortages. Japan saw more than 5,000 people seek hospital treatment due to a heatwave last week.However, many parts of the US recorded their coldest ever period in July and parts of Canada too and the US has suffered an agricultural disaster in 2019.
The crazy weather affecting the US in 2019 continued when a new daily low-temperature record was set in International Falls, where the mercury dipped to 37 degrees F, (2.5 deg C), breaking the record (38 degrees) set back in 1898. The low temperature recorded in Minnesota on July the 30th was around 20 deg F cooler than it should be this time of the year.
Extreme Weather