The Calm Before The Storm! Trio of Tropical Storms in the Western Pacific lining up set to become typhoons after unusual quiet period 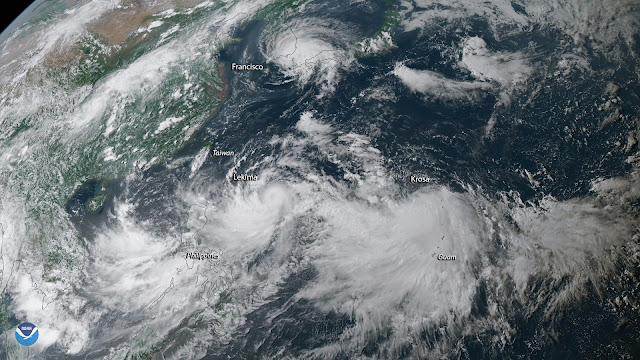 Credit NOAA, click on image to enlarge
A triangle of tropical storm systems in the Western Pacific Ocean was seen by Japan’s Himawari-8 satellite on Tuesday, August 6, 2019, breaking a period of unusually calm storm activity in the region according to the Joint Typhoon Warning Center (JTWC).
To the north, is Tropical Storm Francisco, which made landfall in southern Japan as a typhoon early on Tuesday, August 6, 2019, local time, bringing heavy rainfall and strong wind gusts up to roughly 85 mph. It's now a tropical storm and is moving west to northwest toward the southern coastline of South Korea.
To the south is Tropical Storm Lekima, which is heading toward Japan’s southern Ryukyu Islands, Taiwan and eastern China. The storm is expected to become a typhoon by Wednesday as it travels north-northwest but should become a tropical storm by this weekend. Residents in these areas are being warned of heavy rains and winds up to 75 mph, along with potential flooding and landslides.
Tropical Storm Krosa has formed farther east over the open water near Guam and may also strengthen into a typhoon over the next few days as it moves northward. The storm is forecast to move near Iwo Jima and the Ogasawara Islands later this week, but will mostly remain over the sea for the next few days. Whether or not the storm will make landfall in Japan is uncertain at this time, but the storm has the potential to be even more potent than Francisco or Lekima.
Thus far, the only other typhoon in the area in 2019 was Wutip, which appeared toward the end of February. According to Dr Philip Klotzbach of Colorado State University, who reviewed JTWC records of typhoon activity recorded back to 1945, the only other year that had no typhoons from February to August was 1998. A typical season sees about eight named storms and five typhoons by this time.
This image was captured by the Advanced Himawari Imager (AHI) on Japan’s Himawari-8 satellite. This satellite, the first unit of the Japan Meteorological Agency's (JMA) third-generation of geostationary satellites, provides visible light and infrared images of the Asia-Pacific region. Himawari's data are vital for global geostationary coverage, which is why NOAA and JMA have agreed to mutual back-up arrangements for their geostationary systems.