Tourists jump into the sea in panic as Italian volcano erupts: A powerful mag 6.2 quake off the west coast of Canada: Major quake and volcano activity uptick continues 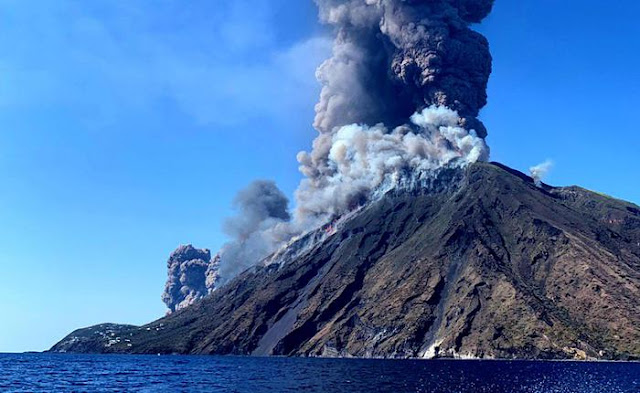 A volcano on the island of Stromboli, Italy has erupted, throwing ash high into the sky, with tourists reportedly throwing themselves into the sea in panic.
Italy's ANSA news agency reported that tourists, frightened by the unexpected explosion on the small Mediterranean island, had thrown themselves into the sea.
It said two new lava spouts are creeping down the volcano on the famed island.
The volcano was also shooting out red-hot rocks called lapilli, local sources said.
One eyewitness added: "A huge column of dense black smoke is coming out of the crater."
Another said: "There was a powerful explosion.
We heard a bang, then a column of smoke and lapilli fell onto Ginostra, and flames on the slopes of the volcano".
Fires have broken out across the island, according to fire services and forest rangers.
It's not a particularly active volcano, so that's a surprise." Michela Favorito, who works in a hotel near Fico Grande, on the east side of the island, said: "We saw the explosion from the hotel.
There was a loud roar.
"We plugged our ears and after this, a cloud of ash swept over us.
"The whole sky is full of ash, a fairly large cloud."

As we move into July the uptick in volcano activity has suddenly spiked.
Alert Level Raised at Hawaii's Mauna Loa Volcano, the World's Largest Active Volcano.
Federal officials raised the alert level Tuesday for the world's largest active volcano, Hawaii's Mauna Loa, which last erupted in 1984.
The U.S. Geological Survey changed the level from "normal" to "advisory" following a steady increase in earthquakes and ground swelling that began in March.
Meanwhile, at least 16 volcanic quakes and six rockfall events on the Mayon Volcano were recorded by the Philippine Institute of Volcanology and Seismology (Phivolcs), signifying a renewed abnormal behaviour since its last eruption in January last year. In its bulletin on Tuesday, Phivolcs said the volcano's seismic monitoring network recorded the quakes and rockfall events in the last 24-hour observation period.
Peruvian scientists are registering a 100 to 120 seismic events per day in the volcano of Ubinas, which is a sign of increasing eruptive activity of the volcano, Hernando Tavera, executive president of Peru's Geophysical Institute (IGP), told Sputnik.
Last week, IGP warned about the intensified eruptive activity of the Ubinas volcano and issued a recommendation for local authorities to raise the alert level over a possible eruption. "Currently we are registering from 100 to 120 seismic events in Ubinas, while earlier we recorded one [seismic event] per day ...
At the same time we should take into account that Ubinas is a very active volcano," Tavera said.
He added that Ubinas was the most active volcano in Peru.
Mount Merapi, which located at the border area of Yogyakarta Special Region and Central Java, spewed a lava avalanche on Sunday up to 850 meters in distance, according to the Geological Disaster Technology Research and Development Center (BPPTKG).
Lava avalanche monitored by surveillance cameras during the observation period from 12:00 to 6:00 a.m Western Indonesian Time (WIB) was flowing upstream of Gendol River, the Head of BPPTKG Hanik Humaida stated. During the observation time, there were also two volcanic earthquakes monitored with amplitude ranging between 4 to 27 millimetres and lasting between 41.8 to 85 seconds.
Meanwhile July's first major quake, a mag 6.0 struck Vanuatu yesterday close to one of the most active volcano area in the world.
June saw a large uptick in volcano activity accompanied by a spike of major quakes around the Pacific Ring Of Fire.
A total of 18 major quakes with all of them recorded around the Pacific Ring Of Fire were registered in June, the largest number of major quakes recorded in one month this year.
A total of 78 major quakes have been recorded this year so far.