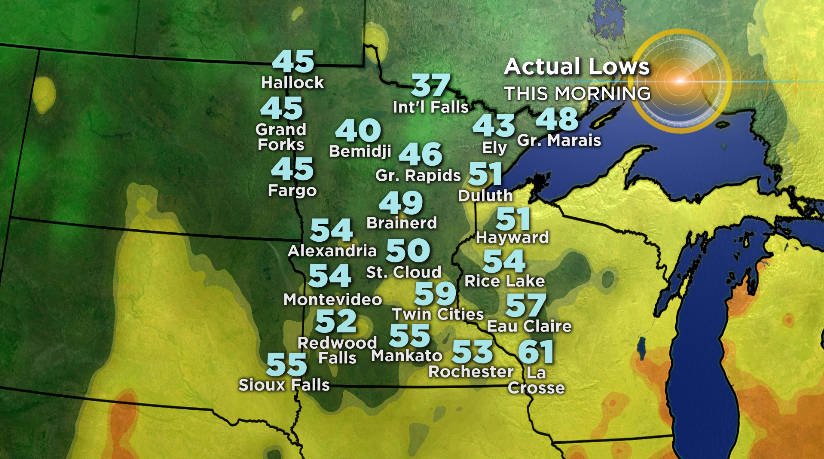 The crazy weather affecting the US in 2010 continues when a new daily low-temperature record was set in International Falls, where the mercury dipped to 37 degrees F, (2.5 deg C), breaking the record (38 degrees) set back in 1898.
The low temperature recorded in Minnesota on Tuesday morning is around 20 deg F cooler than it should be this time of the year.
Temperatures in the area don’t typically reach the 30s until late September, early October.

Just 10 days ago, a  dangerous and deadly heatwave gripped more than half of the U.S.
Tens of millions baked in record-setting high temperatures with heat advisories or warnings from the Midwest to much of the East Coast.
A very rare July "cold front", ended the gargantuan heatwave, which raised a few eyebrows.

2019 has already been declared the worst agricultural disaster in modern American history with catastrophic flooding, continued through March to the beginning of July.

Anchorage, Alaska hit 89 degrees F, (32 deg C), in July to break the all-time highest temperature ever recorded: Campbell Creek hit 91 degrees F, (33 deg C)
Meanwhile, as Alaska has been suffering the heatwave for weeks now with temperatures reaching 92 deg F, (33.5 deg C), massive fires in remote areas are burning out of control.
Plumes of smoke from the fires can be seen from space.
Alaska alone has lost 1.6 billion acres to wildfires this year.

While the continental United States recorded its wettest 12-month period in recorded history this year, historic flooding and record-shattering rainfall amount landed May 2019 as the second-wettest month in the United States according to a report by Accuweather.

Many farmers are facing bankruptcy this summer as many farms have been to waterlogged to plant crops.

America's strange and bizzare summer weather is geoengineering weather modification. Last week near 100 degrees and then this 37 degree low comes??! Raised a few eyebrows did it? Well that's good, are you waking up yet!!? What is the temp in Alaska next to this nucleated cold in Minnesota? I bet still sizzling and that's why there is no mention of it up against this fake cold in Minnesota. If you're paying attention, this bullseye cold is exactly where all the fake winter polar vortexes goes too. I don't believe it happened once before in 1898 either. Bullshit! Man had no Geo back then and this is totally unnatural. That is what they always say to get those raised eyebrows to settle back down and feed the stupid GW deniers their daily input of propaganda lies to keep the fighting over "is GW a hoax" going strong. Maybe they will get some snow this august, lol.... What is Alaska's temps as this happens in Minn.? What is the arctic temp as this happens in Minn.? Duh, people are hopelessly stupid. Really tired of watching this insanity!!!! How can anyone not see how fake this is after so long now and all that is happening around it, before it, after it etc etc.!?

Lost farmland? Great for insurance companies and big Agriculture. More money for them (tax payers will pay out nicely). More land for them.