Hundreds of sharks wash up dead off the coast of Wales, some heavily pregnant with pups hanging out of them and some with fin's missing. 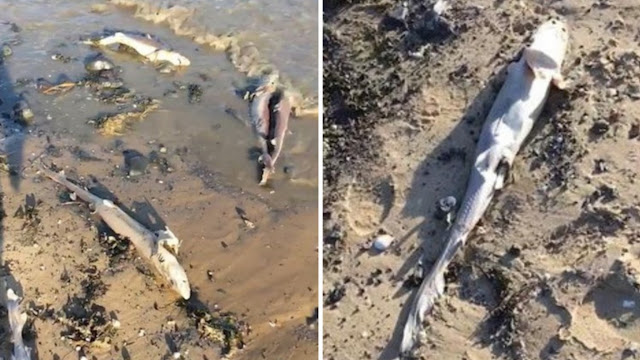 Shocking footage shows how 100s of dead sharks washed up on a beach in Wales - leaving locals baffled.
Many of the sharks were found to have their fins missing - sparking fears they may have been cut off before the fish were tossed back into the sea.
Some fishermen have vented their fury that the shark massacre at Burry Port, West Wales, could have been the result of trawling.
Video footage shows the beach covered with more than100 shark bodies - with some having decomposed in the water.
Beachgoer Lisa Pritchard said she stopped counting after wave after wave of dead sharks washed onto the beach.
"Such a sad, wasteful sight.
I stopped counting in the end as every wave brought more bodies," she said.
"It was mostly smooth-hounds down Burry Port, but heavily pregnant ones with pups hanging out of them.
"I dread to think how many were still floating in the sea.
I'm sure what we saw was a small percentage of what was thrown back.
"There was not one mark on them - no hook so likely a net by-catch - but because it's not the species being hunted they die and get thrown back."
A spokesman for the Marine Conservation Society said the fish appeared to be smooth-hounds, also known as dogfish, a type of shark common in British waters.
They are often caught up in trawler nets and then dumped back into the sea.
Fisherman Vince Sims said: "What angers me most of all is this is the result of trawling, not fishing with a line.
"They've got all the rules about how much we can or cannot do in regards to cod or bass capture, us fishermen would never kill fish, only for the plate.
Wrong, very wrong."
Another fisherman believes the sharks may have been "finned".
This practice involves removing a shark's fin and dumping it back in the sea - leaving the fish unable to swim.
The fins are used in soups and are sold as 'medicine' in some areas of Asia.
But the MCS spokesman said: "Shark finning for overseas markets in Welsh waters would be highly unusual and almost certainly illegal."