"The high temperatures across the state is quite unique:" Australian heat wave spreads to Victoria as temperatures set to hit 46 deg C (115 deg F) 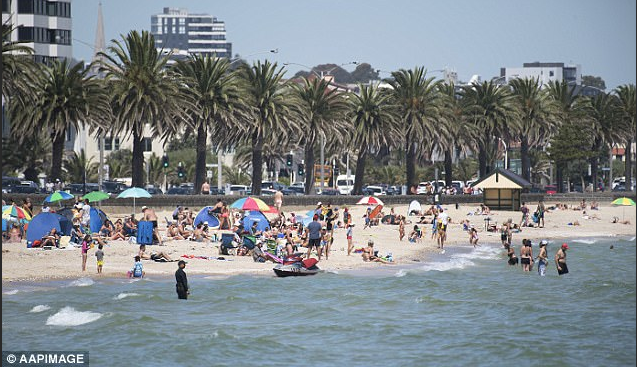 Victoria is expected to swelter through one of their hottest days in three years with temperatures across Melbourne soaring to 42C.
Emergency services have released severe weather warnings for parts of the state and warned of a state-wide total fire ban.
The Bureau of Meteorology said the temperature would peak at about 4pm before falling. 'After an early morning low of 19C around 4am expect a top of 42C near 4pm,' the Bureau said on Twitter.
'A squally cool change will rapidly drop temperatures just after that.'
There are reports at least five children have been rescued from vehicles amid the sweltering conditions.
'Don't leave kids or pets in cars, keep your fluids up and remember that the young and old are at risk.' 'We'll have your backs today but you can help us by looking after yourselves and each other.'
Senior meteorologist at Weatherzone Jacob Cronje said the widespread distribution of the high temperatures across the state is quite unique.
Bendigo, Shepparton and Swan Hill are expected to reach 45C and Mildura should hit 46C.
Mr Cronje said it will be between 42C and 46C for most inland parts of the state except the south-west where conditions will be cooler.
'It grades from the high 20s in the far south-west to about the high 30s over places like Hamilton and Edenhope and then further north and east it's almost exclusively 40s,' he told Daily Mail Australia. 'It's quite the distribution of temperatures, especially over the north-western, central and eastern parts of the state.'
If Melbourne reaches the forecast, it will be its hottest day since January 2016 when the temperature hit 42.2C.
The high temperature in Melbourne is not anticipated to last long as the cool change coincides with the hottest time of the day.
'It looks like the cool change will come in somewhere between 3 and 5pm,' Mr Cronje said.
'The cool change is coming at the peak of the heat.'
There is a fire ban across the state amid the soaring temperatures.
'There's extreme fire danger across four districts, Mallee, Wimmera, Northern Country and North Central,' Mr Cronje said. Severe Fire Danger is also forecast for the South West, Central and West and South Gippsland districts.
'Those northwesterly's ahead of the cool change together with the southwesterly's coming in behind that cool change certainly elevating fire danger,' Mr Cronje said. Weatherzone meteorologist Lachlan Maher explained that strong northerly winds brought hot air mass across from South Australia. '
A strong northwesterly wind present over much of the western parts of the state (Victoria) and that will help bring in some hot air mass from a low-pressure trough that's extending from the interior,' Mr Maher said.
Sydney is also feeling the burden of the heat as the harbour city endures a prolonged period of heat. 'Since the 28th of December temperatures have been at their lowest 4C above average,' Mr Maher said.
'Roughly a week we've had above average temperatures.'
'We can expect 31C on Friday and 33C on Saturday in the city. It will be warmer out west with Penrith at 39C both days.'