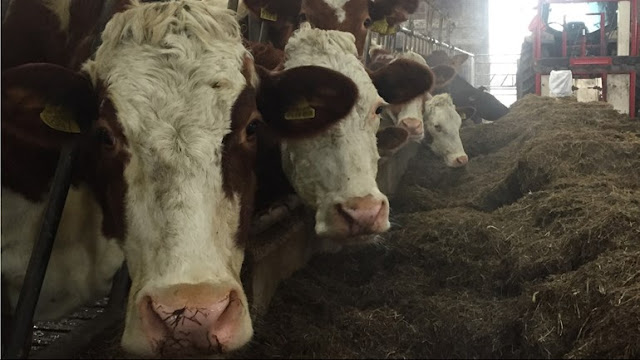 Farmers in North Groningen are puzzled.
They regularly see acute and severe panic attacks among their dairy cattle. The cows then run through the stable in complete mortal fear. The Oudman family from Stitswerd are now looking for publicity. "We would like to know what is going on," says Hilma Oudman.

Particular phenomenon
It is, therefore, a special phenomenon: complete couples of cows that panic from one moment to the next and run through the stable panicking and jumping on top of each other and falling down. This has happened at least three times since October, according to the farmer's wife. The last time was on Saturday morning, shortly after seven.

Demonic
It's not just the Oudmans. Their neighbour, Piet van der Berg, has witnessed similar behaviour with his cattle and my brother-in-law Henk Oudman who owns a farm a few kilometres away. "She has heard a similar story from a cattle farmer from Grijpskerk, a small town close by which is close to a natural gas storage."

Sweating of fear
Moreover, that does not explain why the panic attacks have only occurred since October. "It is as if the cows can smell something," says Hilma. "You can see that a couple reacts at the same time, they put their heads in the air, and then the panic hits. They are terrified, they are really sweating with fear. They may be running for a quarter of an hour, but the whole day they will still suffer. They remain very anxious and alert. "

Pacifier crushing
The first time it happened was on an evening in October last year. Most cows were already in the barn, but they still had free access to the pasture. "They all ran out in a panic all at once, and they did not dare to go inside all night", says Hilma.

Further, in the stall season, the cows have also been panicked a few times. Fortunately, no serious accidents have occurred yet, according to the cattle keeper. "We have one cow with a teat catch, but it can be much worse if they fly out of the corner."