Tropical storm on Sunday-Super Typhoon Yutu by Wednesday: Most intense storm to ever strike the Northern Mariana Islands (NASA) 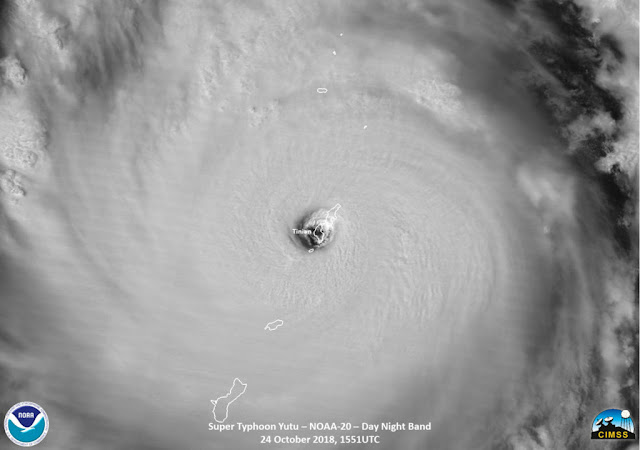 Credit NOAA
Super Typhoon Yutu made landfall across Tinian and Saipan on Wednesday, dealing a catastrophic blow of damaging winds and torrential rainfall to both islands.
Yutu quickly strengthened from a tropical depression on Sunday into a super typhoon by Wednesday as it became the strongest tropical cyclone so far this year. Yutu will bring the continued risk for flooding, damaging winds and dangerous seas to Guam and the Northern Mariana Islands into Thursday as the cyclone moves to the west.
A direct strike with winds over 240 km/h (150 mph) on Saipan and Tinian likely caused extensive damage to structures, downed trees and caused power outages.
This was the most intense storm to ever strike the Northern Mariana Islands, according to NASA. While Guam and Rota dodged the worst impacts, there can still be damaging winds across Rota and locally damaging winds across Guam into Thursday. Both islands will also endure frequent downpours capable of causing flooding and travel disruptions.
Flooding rainfall will be a concern across Tinian and Saipan, where 100-200 mm (4-8 inches) of rain and an AccuWeather StormMax™ of 250 mm (10 inches) are expected.
Rainfall across Guam and Rota is expected to total 50-100 mm (2-4 inches).
The largely uninhabited islands from Farallon de Medinilla to Farallon de Pajaros will also be at risk for powerful winds and flooding.
Dangerously rough seas will continue to batter areas around Guam and the Northern Mariana Islands into Thursday night before improving this weekend.
Prior to Yutu's arrival, residents of Guam and the Northern Mariana Islands were being urged to review typhoon preparation plans.
Residents should have these plans put into place due to the potential for disruptions to daily routines. After affecting Guam and the Northern Mariana Islands, Yutu will continue on a west to northwest track into next week.
Yutu is forecast to maintain super typhoon status into this weekend and will remain a dangerous tropical cyclone as it approaches parts of Asia next week.
Areas from the Philippines to Japan should remain on alert for potential impacts from this dangerous tropical cyclone next week.