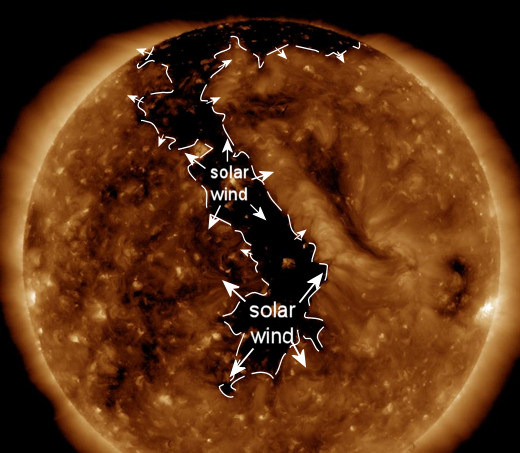 It stretches more than 900,000 km from the sun's north polar crown across the equator into the sun's southern hemisphere, it is a giant and the solar wind being ejected from this monster is heading toward Earth at one million mph and will hit the Earth's magnetosphere head on.
NOAA has upgraded their watch for geomagnetic storms on Oct. 10-11 from G1 (minor) to G2 (moderate to strong).
According to Spaceweather.com, Arctic auroras are almost certain to appear when the gaseous material arrives, and the light show could descend to northern-tier US States such as Maine, Michigan, and Washington.
Coronal holes are common, but this one is unusually large.
Such storms can affect migratory animals that use magnetic cues for navigation and cause a migraine and headaches to people living in northern countries.
This could be significant for The Pacific Ring Of Fire especially the Indonesia area where the people are recovering from the M 7.4 quake and tsunami last Friday, many scientists now believe these coronal holes have a large influence on quake and volcanic activity on our planet, we will see.
We have already witnessed an uptick in volcanic activity in the last couple of days.