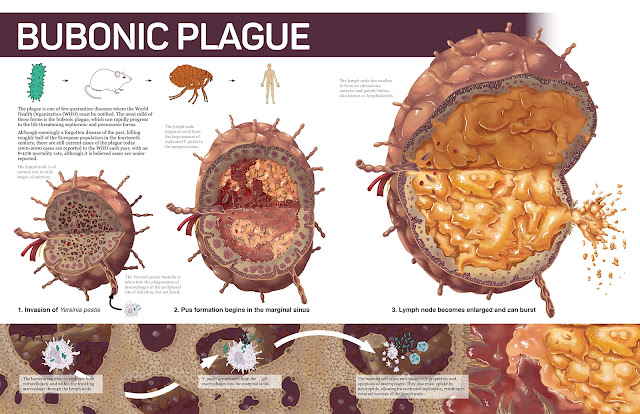 Photo culturevie.info click on the picture to enlarge
In an update on the plague situation in Madagascar, the Ministry of Health is now reporting plague has affected 8 districts in the country-Central Highlands, Ambalavao, Ambatofinandrahana, Ambositra, Ankazobe, Fandriana, Miarinarivo and Antisirabe.
In these 8 districts, 16 suspect cases have been reported in a month, including 4 fatalities.
A total of 5 of the cases have been laboratory confirmed.
Of the 5 confirmed cases, 2 were classified as bubonic plague and 3 as the pulmonary plague.
Plague is known to be endemic in Madagascar and a seasonal upsurge (predominantly the bubonic form) usually occurs early every year between September and April.
An outbreak of plague in Madagascar has killed two people, a health official said on Tuesday, marking the official start of the season when the disease is considered to be at its deadliest.
The World Health Organisation (WHO) has warned that this year's strain could be even more virulent.
"According to counts undertaken between August 1 and September 13, we recorded eight suspected plague cases, six of whom recovered and two died in their villages," said health ministry official Manitra Rakotoarivony.
The first fatality was recorded in Fiadanana, north of the capital Antananarivo, while the second was reported in Ambalavao in the Indian Ocean island's interior, added Rakotoarivony.
The plague germ Yersinia pestis is typically transmitted to humans from infected rats via fleas.
It can also be transmitted from human to human through cough droplets expelled by a person with a pneumonic form of the disease.

Last year China became the 7th country in 2017 to confirm a Bubonic plague outbreak after the biggest outbreak in 50 years in Madagascar killed more than 200 people.
China was the latest country last year to discover the Bubonic plague after a person died of the disease.
Subei County in northwest China's Gansu Province on Wednesday lifted a quarantine for plague after local health officials said they believe they have controlled the disease from spreading.
A person in Subei showing symptoms of plague died on Dec. 12.
Further testing later that day confirmed the person died of the bubonic plague and ensuing septicemic plague.
The county was put under quarantine the following day.
twelve people who had close contact with the victim have shown no symptoms of the plague in the past nine days, local health officials said.