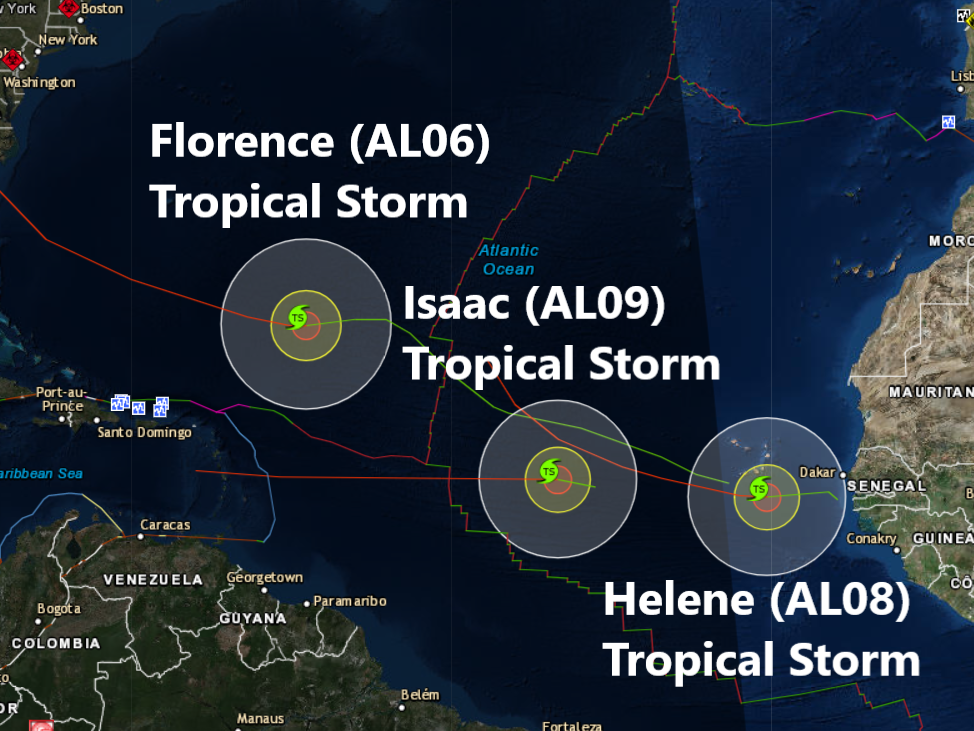 It's September again and yes... three tropical storms are queuing up in the Atlantic all three with an eye on the Caribbean and the Gulf of Mexico.
Warm waters are feeding Florence and is forecast to restrengthen into a hurricane and push close to Bermuda and the United States East Coast this week.
According to AccuWeather.com, Florence may evolve into a serious direct threat.
After forming near the Cabo Verde Islands last weekend, Florence became the first Category 4 hurricane of the 2018 Atlantic season as it entered a zone of low wind shear and sufficiently warm waters last week.

Two new tropical storms have emerged in the eastern Atlantic Ocean this week and one could threaten some of the Caribbean Islands this week.
Tropical Storm Isaac and Tropical Storm Helene have joined Florence in the Atlantic Basin.
Helene, which is located off the west coast of Africa, will bring tropical-storm-force conditions to the Cabo Verde Islands into Sunday afternoon. Farther west, Isaac will track toward the Lesser Antilles this week.

It's just less than a year since the end of the most remarkable Atlantic hurricane season in modern history, which officially ended on November the 30th. 2017.
It was the hurricane season that wouldn’t quit, it was in the top ten's most active season in the historical record dating to 1851 and was the most active season since the crazy year of 2005.
Many Carribean islands have been destroyed forever.
All ten of the season's hurricanes occurred in a row, the greatest number of consecutive hurricanes in the satellite era.
In addition, it was by far the costliest season on record, with a preliminary total of over $401.89 billion (USD) in damages, which is nearly three times the cost of 2005’s total, and essentially all of which was due to three of the season's major hurricanes — Harvey, Irma, and Maria.
This season is also one of only six years on record to feature multiple Category 5 hurricanes, and only the second to feature two hurricanes making landfall at that intensity.