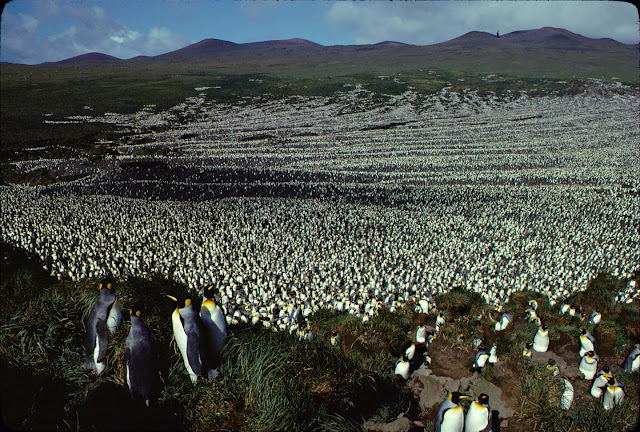 Photo eurekalert.org
The biggest colony of king penguins on the planet has collapsed, with nearly 90 per cent of the population vanishing since the 1980s, ecologists said.
The colony was first discovered in the Sixties on Ile aux Cochons, also known as Pig Island, in the southern Indian Ocean, between Madagascar and Antarctica.
At its peak, it contained two million birds and 500,000 breeding pairs, but new satellite images have shown an empty landscape, in which 88 per cent of the colony appears to have vanished.
Although nobody has set foot on the island since 1982, photographs taken from a helicopter during a recent flyover show that there could be just 60,000 breeding pairs left, and scientists fear the decline will continue.
"It is completely unexpected, and particularly significant since this colony represented nearly one-third of the king penguins in the world," said research leader Dr Henri Weimers-kirch, an ecologist at the Centre for -Biological Studies in Chize, France.
King penguins do not make a nest, but lay one egg at a time and carry it around on their feet.
Parents take turns incubating the egg, switching every couple of weeks over two months. They are currently listed as a species "of least concern" on the Red List of Threatened Species but that now may be re-evaluated after the dramatic loss. The cause of the population collapse remains a mystery, with scientists speculating that climate fluctuations or disease could be to blame. In 1997, a particularly strong El Nino weather event pushed the fish and squid on which king penguins depend further south, beyond their foraging range. Researchers plan to mount future field studies on the island to test animals for infection and so see if disease may be wiping out the birds. The latest findings are published in the journal Antarctic Science.