The major quakes keep on comin' a deadly mag 6.1 hits Iran and a mag 6.0 rocks Alaska as major quake and volcanic activity continues 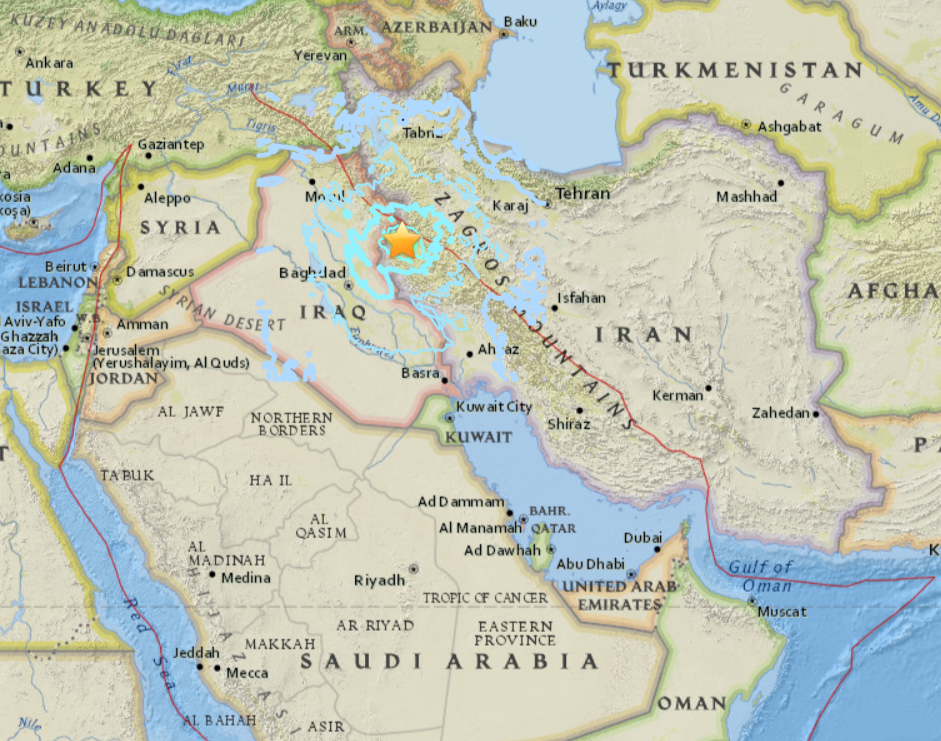 
August has seen a plethora of major quakes and volcanic activity, unprecedented in my years as a blogger and the quakes keep coming...
Three earthquakes including a magnitude 6.1 major quake have struck western Iran, with state media reporting at least two people killed and 241 injured.
The U.S. Geological Survey says two other earthquakes, measuring 4.4 and 4.2 magnitude, struck early Sunday near the city of Javanrud in Iran's Kermanshah province.
State TV reported the toll, citing Reza Mahmoudian, a governorate official.
The state-run IRNA news agency says one of the two killed was a 70-year-old man who died of a heart attack during the earthquakes.
Iran is prone to earthquakes. Last November, a major 7.3 magnitude earthquake struck the same region, killing over 530 people and injuring thousands.
Meanwhile last night a magnitude 6.0 - 22km SSE of Amukta Island, Alaska is the second to hit the area since Thursday and the 4th major quake to hit Alaska this month.
According to Spaceweather.com, a strong G3-class geomagnetic storm is in progress on Aug. 26th as Earth passes through the wake of a CME that arrived with little fanfare approximately 24 hours ago. Strong magnetic fields in the CME's wake have opened a crack in Earth's magnetosphere, allowing solar wind to enter and causing seismic and volcanic disturbances, (IMHO)
Once again the quakes come as our Earth is inside a stream of solar wind flowing from a massive coronal hole.

An incredible surge of major quakes has hit the planet in the last two weeks after an incredible low count this year up to the beginning of August when a flurry of major quakes have been registered around the world coming entirely out of the blue.
The surge of major quakes does, however, coincide with three enormous coronal holes which have been spewing solar wind at the Earth's magnetosphere during the same period of the quake flurry.
Just two weeks ago 2018 was on course to register the lowest count of major quakes this century.
A flurry of major quakes has been registered in a two week period when a massive coronal disturbance on our Sun has ejected a stream of solar wind from two giant holes on our Sun's atmosphere.
Today's major quakes bring the total in August to 21, easily the most in one month this year with the annual total to 71 so far.
Along with the quake activity August has seen an uptick in volcano activity too, yesterday the volcano on Papua New Guinea's Manam Island erupted again as well as Mount Etna the most famous and biggest volcano in Europe.
Earlier in the month, Japan's Meteorological Agency said volcanic earthquakes and sulphur emissions had increased at a peak on Kuchinoerabujima island, located roughly 1000km southwest of Tokyo.
Nearly two dozen quakes at the gigantic Katla volcano in Iceland had experts worried this month which is long overdue for an eruption and the deadly Fuego volcano in Guatemala which killed 300 causing thousands to be evacuated two months ago erupted yet again on in early August.
At the beginning of the month, the Karymsky Volcano Kamchatka in eastern Russia exploded plumes of ash spreading almost 100 km
And on the 1st of August Mexican colossus the Popocatepetl volcano spewed ash and smoke two kilometres high threatening 30 million people.