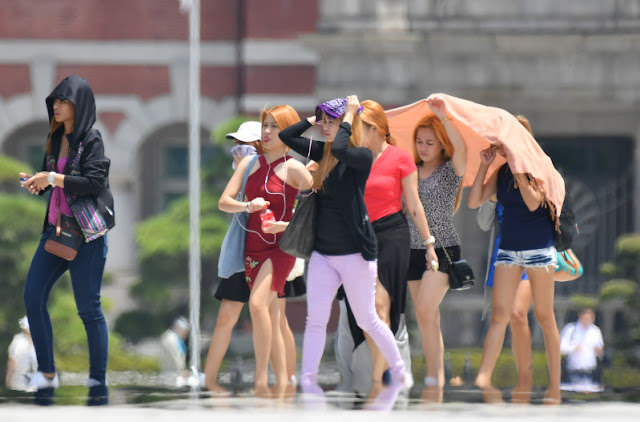 Photo mainichi.jp
At least 29 people have died due to heatstroke in South Korea and more than 2 200 suffered heat-related conditions, as prolonged and record-breaking heatwave engulfs the country.
The Korean Meteorological Administration (KMA) said the country is undergoing an extended heat wave, with at least 15 days of temperatures over 35 °C (95 °F).
Capital Seoul recorded 39.6 °C (103.2 °F) on Wednesday, August 1, 2018, making it the hottest day the city has seen in 111 years.
The town of Hongcheon, in the northeastern province of Gangwon, recorded a record high of 41 °C (105.8 °F) on the same day, the highest temperature in South Korea since records began in 1904.
By August 5, 60% of the country recorded the hottest weather in the country's modern history.
The heat's been continuing after dark and into the mornings, causing what meteorologists call "tropical nights."
Authorities reported more than 3 million deaths of livestock, while vegetable prices doubled due to supplies being affected.
Temperatures eased up on August 5 and 6, with showers in some regions.
It'll be a little cooler from now on, especially in the morning, meteorologists said.
In neighbouring North Korea, state newspaper Rodong Sinmun said that this year's high temperatures are an unprecedented natural disaster.
The North Korean government has called on its people to wage an 'all-out battle' against a record heatwave as the country's already fragile crops face drought and the authorities struggle to respond.