A surface sea sample the warmest it has ever been since records began in 1916 found off the iconic Scripps Pier in La Jolla, California. 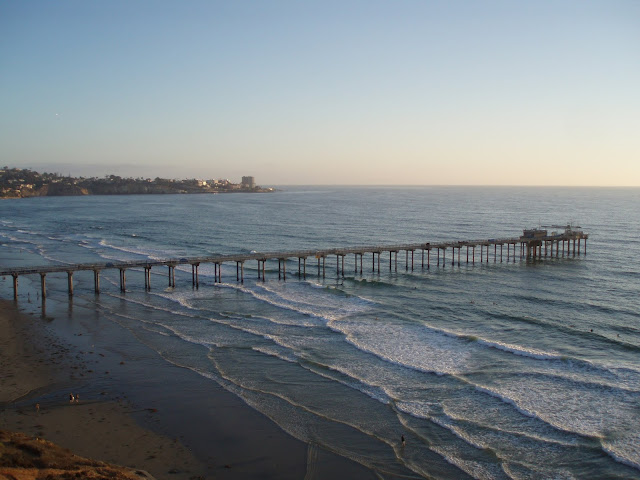 Since World War I, scientists have been recording ocean temperatures at the iconic Scripps Pier in La Jolla, California.
Every single day, someone walks to the end of the pier and takes a seawater sample at the surface and bottom of the ocean and measures its temperature and salt concentration ("salinity").
Earlier this week on August 1, the surface sample was the warmest it has been since the record began in 1916.
Researchers measured a sea surface temperature of 78.6 °F, which was 0.2 °F greater than the previous record from an unusual warming event in July 1931.
These temperatures are on par with what is observed off the coast of Miami, Florida during winter months, which are known to be the warmest waters around the continental United States.
Given that ocean waters in San Diego are often warmest in August, this record could again be broken later this month.
Pacific Ocean temperatures recently increased during a marine heatwave in 2014- known as the "blob" - and then an El Nino event in 2015.
As biological oceanographer Dr Clarissa Anderson told NPR, "the temperatures we recorded ever since they were on a reset.
They were at a higher level and never came back down."
Together, the warm waters brought by the blob and El Nino not only reduced the number of available nutrients in seawater, but they also facilitated the proliferation of toxic algae that led to the closure of the Dungeness crab fishery in California.
Even after these conditions subsided, fisheries, such as salmon, were slow to recover.
And, this recent bout of warming is already affecting the bottom of the food web, with scientists observing decreases in microscopic algae ("phytoplankton").
Human-driven climate change has already raised global sea temperatures by nearly 2 °F so we can expect the frequency of record-breaking incidents to increase.
Warm ocean temperatures in San Diego are consistent with record-breaking ocean temperatures observed in Australia in 2015 and 2016, and across the world's oceans in 2017.
They are also consistent with a spate of warming events that have been occurring across the greater San Diego area in 2018 (that have enabled multiple wildfires in the past few months).
While these warm waters may temporarily improve local sportfishing in San Diego by bringing species traditionally found in Mexican waters to southern California, it is important to consider what continuously rising water and land temperatures, as well as raging wildfires, will mean for the future of California and our planet.