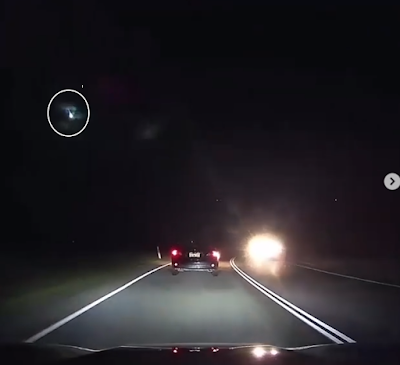 Photo The Perth Observatory
A mystery ball of light zoomed over parts of Australia before exploding and baffling witnesses who shared their disbelief on social media.
A huge bang was reportedly heard by residents in Western Australia after a giant, mysterious ball of light beamed across the night sky.
Social media went nuts with reports from baffled Aussies who said the "flaming object" ominously lit up the sky at about 7.40pm local time last night.
Some said the object appeared to explode and "continuing off into the clouds".
Several residents reported hearing a "huge bang" which took place about the time there was a "flash in the sky".
Dashcams and security systems captured the spectacle and many took to social media to describe what they saw.
"(My) son saw a big ball of light fall overhead then a minute later there was a huge bang that shook our house," Kate Clare commented on a post on the York Community Resource Centre Facebook page.
"I jumped off the couch and my partner went running out the front to see who was throwing something at our window and all the neighbours did the same thing," Esmeralda Harmer said.
The Perth Observatory was inundated with footage from locals and put together a collection of images on Instagram late last night.
The suspected meteor is believed to have crashed to earth some 100km east of Perth.