UK ON RED ALERT! 8th named storm of the year "Emma" to bring galeforce winds and another 50cm of snow as "gas deficit warning" issued 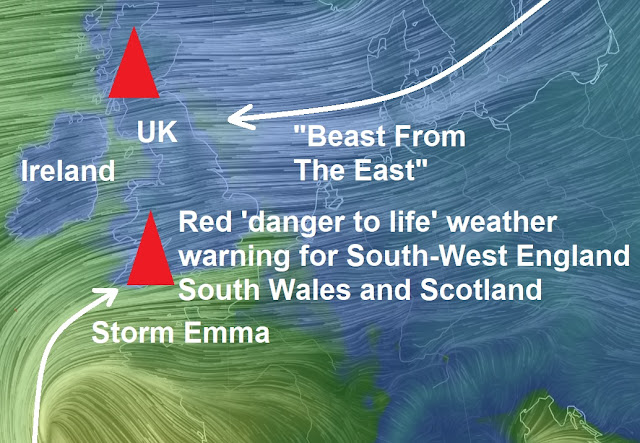 The first day of meteorological spring is kicking off with gale-force winds and whiteouts, causing further misery for travellers as storm Emma is set to bring more misery later on in the day.
With windchill temperatures of -20 deg C (-4 deg F) from "The Beast Of The East," heavy snowfall and the eighth named storm of the year "Emma" bringing galeforce winds and another 50cm of snow, parts of the UK have been put on a red 'danger to life' weather warning for South-West England South Wales and Scotland.
Hundreds of people were reported stranded on motorways overnight.
The Met office has issued a red 'danger to life' weather warning for South-West England South Wales and Scotland as the bitter cold and snow will combine with Storm Emma, closing schools and businesses and causing travel chaos with many airports closed or expected to close.
According to The Independent, many roads have been left impassable by drifts of snow, while trains and flights have also been hit by delays and cancellations as Storm Emma rolls in from the Atlantic and meets the chilly Siberian air of the so-called "Beast from the East".
The National Grid has issued a "gas deficit warning" over fears supplies could run out as temperatures plummet across the UK.
The operator issued the guidance at 5 am as supply slipped 48 million cubic metres short of demand.
A spokesperson said the notice was a "first stage" warning to say "it's looking tight", which will remain in place until 5 am on Friday.

Widespread snow is expected to develop through Thursday afternoon and evening.
Around 10-20 cm is likely to fall widely, with the potential for up to 30 to 50 cm over parts of Dartmoor, Exmoor and parts of southeast Wales.
Snowfall will be accompanied by strong to gale easterly winds, leading to severe drifting of lying snow, especially in upland areas. Severe cold and wind chill will compound the dangerous conditions, with very poor visibility.
Towards midnight, there is a chance of snow turning to freezing rain in places, mainly across the south of the area, with widespread icy stretches making driving conditions particularly dangerous.
xx
Home
at March 01, 2018