Bushfires approaching Melbourne with heatwave melting highway's in Australia bringing to a close the most incredible start to a new year ever! 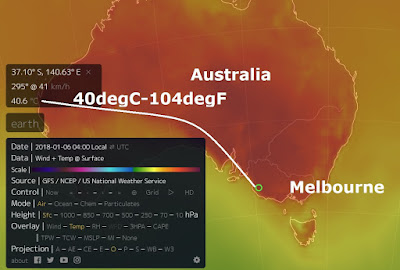 Earthwindmap
It has undoubtebly been the most incredible start to 2018, record warm for Holland and Alaska, record cold for much of the eastern and mid-planes in the US.
Record snow fall for Erie in the US and Florida, the massive snow storm 'Bombogenesis' Grayson along with two massive named storms Eleanor and Dylan which both battered the UK and western Europe.
Throw in a rare heatwave to attack Kenya all this month and two volcano eruptions.
We now have a bushfire approaching a major city and a heatwave in Australia strong enough to melt roads, if this is a glance how the rest of the year will be then we are in for a rough ride! 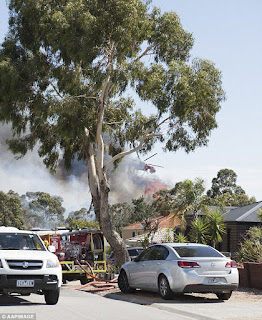 Bushfires destroy buildings in Australia as heatwave melts highway surface
A heatwave has gripped parts of Australia with temperatures so strong roads and highways have begun to melt with bushfires raging out of control which has destroyed buildings and is threatening lives.
According to Reuters, the heat was strong enough to melt the bitumen on a 10-km (6-mile) stretch of freeway in Victoria, national broadcaster ABC News reported.
Emergency warnings were issued both in Victoria and in the nearby state of South Australia, where authorities advised residents of a rural area to seek shelter in buildings from an out-of-control fire.
Total fire bans took effect from midnight as Victoria, South Australia and Tasmania braced for dangerous fire conditions caused by temperatures exceeding 40 degrees Celsius (104°F).