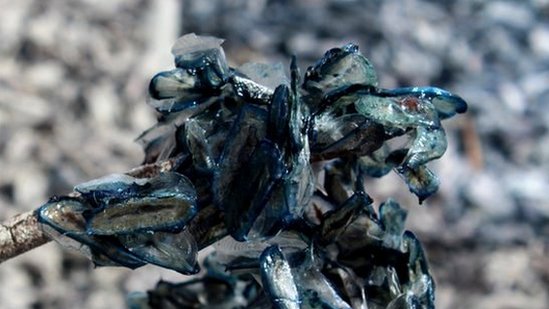 Tens of thousands of jellyfish-like creatures have washed up on Greymouth beaches, surprising even the Department of Conservation with the scale.
DoC says the rotting mass are by-the-wind-sailors, also called Velella.
A huge mass blankets an 18m by 8m area of the Blaketown aerodrome car park, with more scattered south along the high tide mark.
By last evening, they were giving off a strong smell as they lay in the sun. DOC marine expert Don Neale said by-the-wind-sailors were related to jellyfish and "bluebottles", which also often washed up.
"They're quite often seen washed up on West Coast beaches and when there's one there's usually dozens, but I've never seen them drifted up this much (in their thousands) in one place before," Neale said.
"As the sea starts to warm up in the spring, all the floating plankton starts to bloom and it's not unusual to get a lot more things like this starting to wash up, as well as 'red tides' of plankton out at sea."
Just over a week ago, a large number washed up at Cable Bay, Nelson, and a few days later also at Farewell Spit.
They get their name from the small erect 'sail' on their backs, which allows propulsion by the wind. They are not considered dangerous and are part of the Cnidaria family.

Whether down to climate change or other factors Jelly fish appear to be turning up en-mass in the most unlikliest of locations...
Just last week killer jellyfish wiped out tens of thousands of salmon after invading fish farms along the west coast of Ireland.
Some 80 percent of the salmon stock at Killary Harbour in Co Mayo died after being stung last month.
Tens of thousands of fish were also killed at Kilkieran Bay and Outer Bertraghboy Bay in Connemara, Co Galway, and at Bantry Bay in Co Cork.
Between 1 percent and 15 percent of fish in these three fish farms died as a result of jellyfish stings. The death toll is believed to be the highest in Ireland since 2007 when more than 100,000 salmon were killed by jellyfish off the coast of Antrim.

Also last week an invasion of potentially fatal jellyfish-like creatures on Britain's shores is the biggest ever recorded in the UK.
The Portuguese man-of-war was first spotted in Cornwall and have been seen as far east as Milford-on-Sea in Hampshire.
The Marine Conservation Society said it had received reports of thousands of the organisms which have long purple tentacles.
It amounts to the greatest number of Portuguese man-of-war recorded in the UK since records began in 2003, the MCS said.
Dr Peter Richardson said there had been reports of them in Dorset, Devon, Cornwall and Wales.
"It's the biggest we have ever recorded and they are still coming in," he said.
"The last really big sighting was in 2012.
"They spread further in 2012 but we have had greater numbers this time."
Dr Richardson said being open ocean animals they were very difficult to study, making it hard to tell if there had been a population increase.
He said: "It will be down to a combination of factors [including] the extreme weather we've had with the hurricanes.