IT'S BRUTAL! Record breaking heatwaves across Britain Europe and US as roads melt in the UK and too hot to fly in parts of US 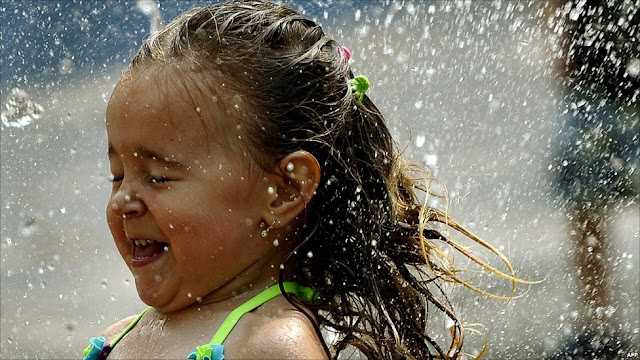 
UK heatwave
Gritters were deployed to shore up failing roads as temperatures on the surface reached 104F (40C), causing them to melt.
Cambridgeshire County Council took the decision to deploy the vehicles after motorists complained that their tyres had started 'ripping the tarmac off the roads.'
Drivers were warned by police to take care on the B1165 near Newton in Cambridgeshire, where the tarmac has melted, and Agnes Owen, who works at a service station nearby, said that it 'sounded like cars were driving on water.'
Evan Laughlin, from Cambridgeshire County Council, said gritters had been used to distribute granite dust to stabilise the road surface and stop bitumen becoming stuck on wheels.
"Normally the roads stand the summer temperatures we get, but just this week it's very hot," she said. Motorists in Tarleton, Lancashire also discovered tar on their wheels as the roads melted., while some commuters in Croydon refused to use trams after noticing the track appeared to be disintegrating. Transport for London said they had thrown sand down to help protect the rails.
Rory O'Neill, TfL's Director for London Trams, said: "The flexible sealant near the track has been softened by the current hot weather and although it is having no impact on the safe running of the tram network, we appreciate it may look concerning to customers.
"Our engineers are on site and, as is standard procedure, they are applying sand to mitigate the effect of the heat."
Elsewhere pupils were sent home from a school in East Yorkshire after refusing to wear blazers as temperatures soared past 86F (30C). Kingswood Academy in Hull said the children were defiant over their uniforms, but parents complained that teachers had put their health at risk.
Allergy charities also warned that the hot weather could trigger fatal attacks and said sufferers should stay away from rural areas and avoid leaving windows open at night and early in the morning when pollen counts were at their highest.

US heatwave
As for how hot is too hot for planes to fly at all, experts tell us it shouldn't be an issue unless temperatures get over 120 degrees and that is exactly the type of temperatures California and Arizona have been suffering as many flights have been suffering
The Daily Mail reports, the streets of Las Vegas and Phoenix have been reduced to ghost towns as temperatures hit 118F and climbing during a punishing heat wave that has grounded planes and left door handles so hot they can leave people with burns.
Temperatures are predicted to reach 120F on the first day of summer in Phoenix, and the heat wave is threatening to bring the 'deadly' temperatures to several parts of Arizona, Nevada and California as well.
Las Vegas is likely to hit 117F on Wednesday, as excessive heat warnings cover almost all of California.
The National Weather Service has been forecasting Tuesday highs of 120F or above in Phoenix for the past several days, a number not seen in the desert city for more than 20 years.

Europe heatwave
Accu weather reports the historic heat that developed across much of Spain over the past week will continue this week with no relief until this weekend.
Madrid set an all-time June high temperature on Saturday when the temperature reached 40.3 C (104.5 F) at Madrid-Barajas Airport.
High temperatures will range from 35-39 C (95-102 F) each day through the weekend in Madrid.