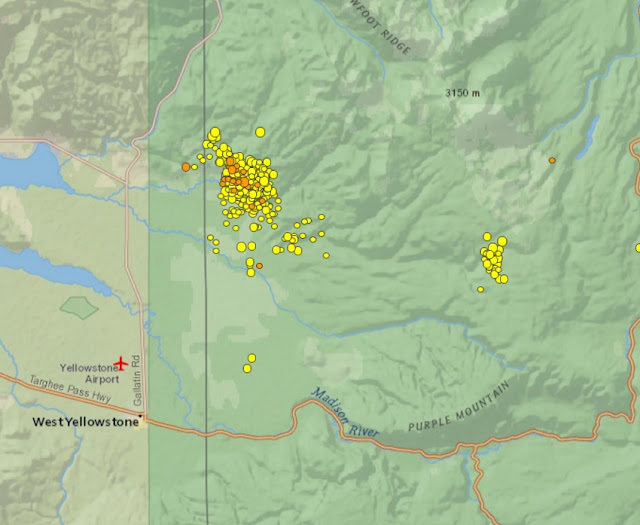 The cluster of quakes in Yellowstone Park has now been joined with a second cluster as over 450 small and mid level quakes have have been recorded in the famous park in the last seven days.
26 of these quakes have been above magnitude 2.5 with the biggest being magnitude 4.5.
The supervolcano has been rumbling with a series of more than 450 recorded since June 14th.
The University of Utah Seismograph Stations reports that an earthquake of magnitude 4.5 occurred at 06:48 PM on June 15, 2017 (MDT).
The magnitude 4.5 was the biggest quake at the super volcano since 2014.

Wikipedia claims the last full-scale eruption of the Yellowstone Supervolcano, the Lava Creek eruption which happened approximately 640,000 years ago, ejected approximately 240 cubic miles (1,000 km3) of rock, dust and volcanic ash into the sky.
Geologists are closely monitoring the rise and fall of the Yellowstone Plateau, which has been rising as fast as 0.6 inches (1.5 cm) per year, as an indication of changes in magma chamber pressure.


The upward movement of the Yellowstone caldera floor between 2004 and 2008 — almost 3 inches (7.6 cm) each year — was more than three times greater than ever observed since such measurements began in 1923. From 2004 to 2008, the land surface within the caldera moved upward as much as 8 inches (20 cm) at the White Lake GPS station. By the end of 2009, the uplift had slowed significantly and appeared to have stopped.