Tons of dead fish washing up everyday along a river in Preah Vihear, Cambodia 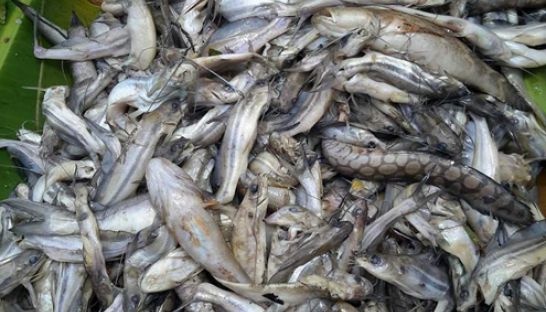 Preah Vihear provincial authorities collected fish and water samples for examination on Monday after nearly a week of mass fish deaths in the Stung Sen river.
Ea Sokha, the director of the Preah Vihear environment department, said the fish began dying on March 24.
Local authorities appealed to people living along the river to refrain from consuming or selling fish from the river.
Sokha said that the fish and water samples have been sent to a Phnom Penh laboratory for examination.
“There are 3 to 4 tonnes of dead fish per day,” said Sokha, adding that the deaths continue to occur. Lut Sang, a member of local NGO Ponlok Khmer, said that his organisation visited the river last Friday after hearing complaints from villagers.
Sang said that he and many villagers believe that runoff from a factory owned by the Rui Feng sugar company – located 10 kilometres from the river, in Chey Sen district – is behind the fish deaths.
“We suspect that the company released pollution into the river,” he said