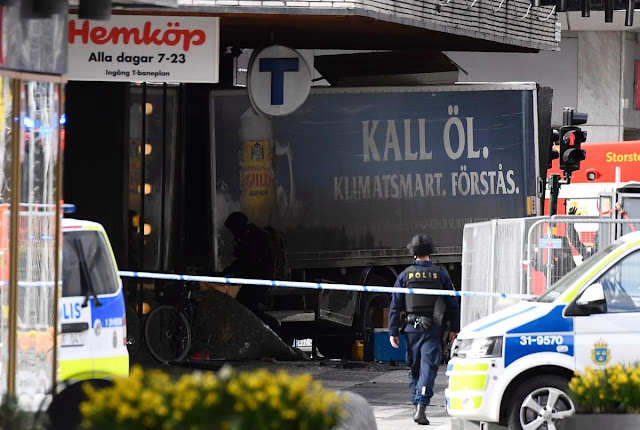 Photo nydailynews.com
At least five people are dead and many more injured after a terror attack that saw a hijacked lorry plough into pedestrians outside a Stockholm department store.
Swedish Prime Minister Stefan Lofven said it appeared the crash was "a terror attack" and the country's intelligence service said there was "a large number of injured".
Mr Lofven said a suspect had been arrested in connection with the attack, which is reported to have involved gunshots, in the Swedish capital on Friday afternoon.
However, Swedish police later said no one had been arrested over the attack.
Blood stains were visible on the streets along with bodies covered in blankets in the aftermath of the incident in Drottninggatan, a street in a busy shopping district.
Paramedics could also be seen tending to the injured near the lorry, which was embedded in the corner of the Ahlens department store with its cab burning.
The attack comes after trucks were used in terror attacks in Nice and Berlin last year and just two weeks after Muslim convert Khalid Masood ploughed his car into pedestrians on Westminster Bridge in London.