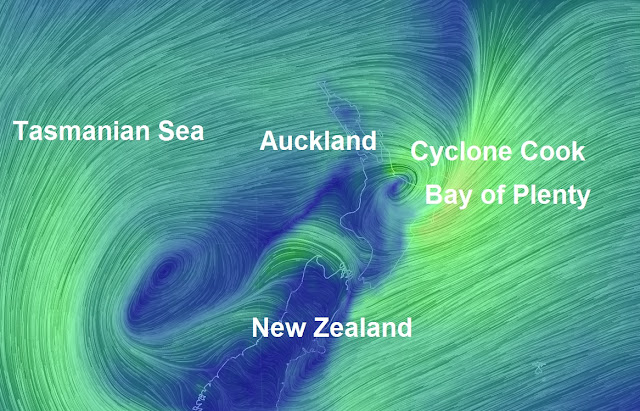 New Zealanders are evacuating towns along North Island's north-east coast, ahead of what is being called the worst storm in generations.
Cyclone Cook is expected to make landfall at 18:00 local time (06:00 GMT) over Bay of Plenty. Authorities have warned of high waves, storm surges, and landslides.
It comes after severe floods caused by the remnants of Cyclone Debbie hit some parts of the country last week.
Bay of Plenty Civil Defence is urging all coastal Bay of Plenty residents to be prepared for the impact of Cyclone Cook, and has provided a checklist of steps residents can take over the next few hours. The Bay of Plenty Civil Defence is strongly advising all residents in low-lying coastal areas to consider self-evacuating this afternoon in advance of tonight's high-tide if they feel unsafe.
The storm surge was predicted to be at 2.5m higher than normal along the coast and 0.8m in Tauranga Harbour.
The small beachside community of Ohope in the Bay of Plenty has been evacuated.
Police and Civil Defence have been going door to door telling nearly 3000 residents to take to higher ground.
Chaos at supermarkets as Cyclone Cook bears down
Supermarkets are slammed today, with last-minute Easter booze runs combining with storm stockpiling as Cyclone Cook bears down on New Zealand.
In Auckland people are queuing up and in the Bay of plenty area people were packing their trolleys with non-perishables, food, and bottled water ahead of the forecast weather event expected to bring power cuts, road closures, slips and flooding.