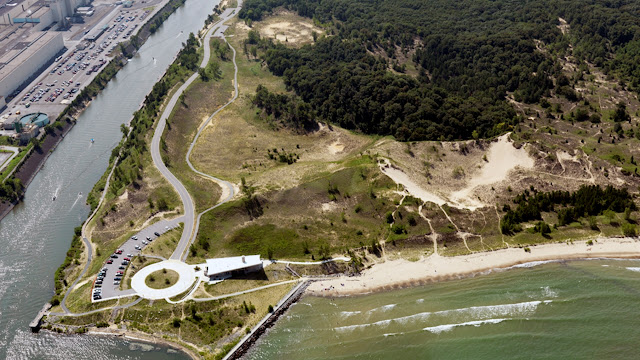 Federal authorities say a US Steel facility in Portage, Indiana, leaked an unknown amount of a potentially carcinogenic chemical into a canal located 100 yards from Lake Michigan.
On Wednesday, the US Environmental Protection Agency (EPA) released a statement that they have been conducting "intensive water sampling" of Lake Michigan after a US Steel Corporation facility discharged wastewater containing hexavalent chromium (also known as chromium-6) into Burns Waterway.
The EPA said their tests have "not detected hexavalent chromium from the spill in Lake Michigan." US Steel says the spill was caused by a pipe failure that caused the chemical to flow into the wrong wastewater treatment plant at the complex, according to the Associated Press.
In a statement, US Steel said, "all production processes were shut down; and additional steps to mitigate the impact are being taken.
These steps include the isolation and repair of the damaged pipe, recovery of material, and the addition of a water treatment compound," according to the Times of Northwest Indiana.
In response, Indiana American Water in Ogden Dunes, the nearest municipal water source, shut down its water intake from Lake Michigan and switched to a reserve water supply "as a precautionary measure."
While they say they have not detected any hexavalent chromium in their stored water, the plant will be closed until "additional data and water testing results confirm there is no threat to the company's source water at this location."
The National Park Service (NPS) has also closed four beaches in the area of the spill "as a precaution to protect the health of park visitors," warning that people and pets "should have no contact with the water of Lake Michigan or Burns Waterway."
Save the Dunes, an environmental protection group in Indiana, is also warning people from coming into direct contact with the chemical, which they say is "the same carcinogenic chemical that appeared in the 2000 biographical film, 'Erin Brockovich.'"
"It is known for creating reversible and irreversible skin lesions if in direct contact, as well as cancer" the group said in their statement.
Aerial footage of the tributary shows a large dark area that appears to be moving into the lake, but the EPA says that's sediment, not the chemical, according to NBC News.
"You're really looking at years - potentially decades of contamination of chromium now out into the environment, where wildlife and people can be in contact," Jennifer Sass, the senior scientist at the Natural Resources Defense Council, told NBC.
"It's going to stay in the soil.
It's going to stay in the water."
According to the EPA, the Great Lakes are the second largest source of fresh surface water in the world, behind the polar ice caps.
Together, they hold 22 percent of the world's fresh water supply.
Lake Michigan alone is a primary source of drinking water for more than 6 million people. Congressman Fred Upton (R-Michigan) said action must be taken to clean up the spill, calling it "an all-hands-on-deck effort" in a press release.
"If there is one thing that unites us it's the need to protect our Great Lakes.
Any chemical spill so close to Lake Michigan is cause for great concern. As we've seen with BP and Flint before, we must ensure clean water for everyone," Upton said in a press release.

From Wikipedia, the free encyclopedia 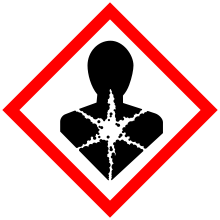 The international pictogram for chemicals that are sensitising, mutagenic, carcinogenic or toxic to reproduction.
A carcinogen is any substance, radionuclide, or radiation that is an agent directly involved in causing cancer. This may be due to the ability to damage the genome or to the disruption of cellular metabolic processes. Several radioactive substances are considered carcinogens, but their carcinogenic activity is attributed to the radiation, for example gamma rays and alpha particles, which they emit. Common examples of non-radioactive carcinogens are inhaled asbestos, certain dioxins, and tobacco smoke. Although the public generally associates carcinogenicity with synthetic chemicals, it is equally likely to arise in both natural and synthetic substances.[1] Carcinogens are not necessarily immediately toxic, thus their effect can be insidious.