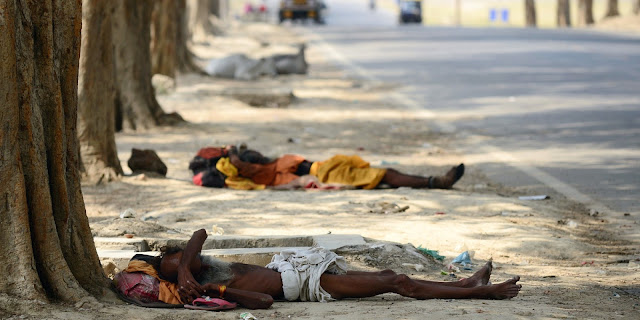 Photo huffingtonpost.com
The ongoing heat wave conditions across the southern states have led to severe water crisis in Gulbarga city in Karnataka.
In the absence of any relief from either rain or winds, the temperature is soaring in the city, reaching beyond forty-five degree Celsius besides acute water shortage in the area.
Speaking to ANI here, one of the residents of Garib Nawaz Colony said, "I appeal the government to please help us.
Every two days only one time water tanker comes to the area.
The people and children stand in the queue for the whole day but are not able to get sufficient water." Another local raised questions on the politicians who make vastly unrealistic promises during the time of election but forgets to deliver at the time of need.
"Please help us as the bore wells have dried up in the area and the tankers which are coming are not sufficient for the people," the local told ANI.
Earlier, Law Minister TB Jayachandra said that the government plans to use modern exploitation technologies to identity underground water reserves.
According to the reports, the government will drill to the depths of 2000 ft to find water.
The minister also said that the state government will distribute the drought relief fund sanctioned by the central government to the farmers.