Another 10,000 homes evacuated from Florida as fires caused by crippling drought conditions has destroyed nearly 100,000 acres this year 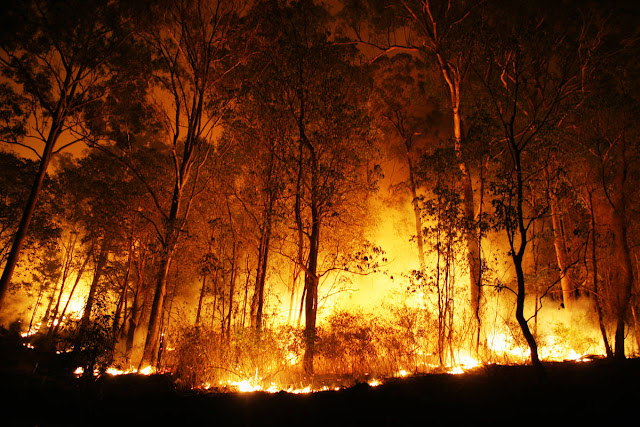 Photo in-australien.com
Nine homes were destroyed and mandatory evacuations of approximately 7,000 homes were in place Friday afternoon due to an ongoing brush fire.
Nearly 5,000 acres were scorched near Everglades Boulevard and 30th Avenue SE.
That fire, which sparked Thursday afternoon was 10 percent contained as of Friday afternoon. Greater Naples Fire Chief Kingman Schuldt described the area as "a war zone."
A second brush fire, which also started Thursday, burned approximately 350 acres near Frangipani Avenue before it was fully contained Friday afternoon, fire officials said.
One person was injured in the Golden Gate Estates fire.
The man suffered second degree burns and was trauma-alerted to the Lee County Trauma Unit, then transported to the burn unit in Tampa.
Brush fires are threatening more than 2,000 homes in southwest Florida, and the Florida National Guard is helping to evacuate residents.
Gov. Rick Scott said in a statement Friday that he deployed the guard and five UH-60 Blackhawk helicopters to help fight 100-foot flames in Collier County. Officials said one brush fire has grown to nearly 5,000 acres and is 10 percent contained.
Roughly 100 deputies went door to door Friday.
Collier County Sheriff Kevin Rambosk said he saw propane tanks exploding and buildings burning where the fire affected a nursery, chemical warehouse and sod company.

Just two weeks ago a Florida state of emergency was declared!

2017 shows a 250% increase in forest fires along with a crippling drought: Nearly 100,000 acres have been destroyed by fire so far this year.

Florida Gov. Rick Scott declared a state of emergency two weeks ago as more than 100 wildfires blaze across the state.
More than with a quarter of the fires were then burning more than 100 acres each, according to the Florida Forest Service.
Since February, nearly 100,000 acres have been scorched across the state.
"Much of Central and South Florida are approaching drought-like conditions and the chances for wildfires are continuing to increase with hotter temperatures and low rainfall.
This may only get worse as we enter the hotter summer months and it is crucial that we take every action right now to be prepared," Scott said.
"It is incredibly important that wildfire response is swift and deliberate and this state of emergency will make it easier for our state, regional and local agencies to quickly work together to protect our families, visitors and communities."
Drought conditions have already spread throughout the Florida Peninsula.
About 42 percent of the state was in drought as of April 4, said weather.com meteorologist Chris Dolce.