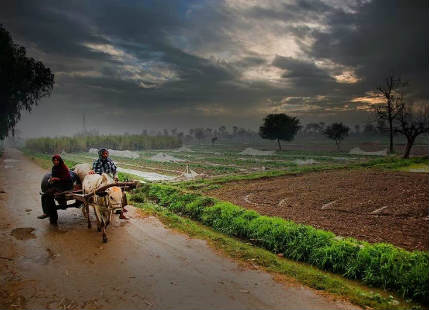 Photo skymetweather.com
Dust storms and heavy rain over upper parts of the country and in north-east Punjab ended an over a week long severe heat wave, sharply dropping temperatures to the much relief of people battered by harsh weather and power load-shedding.
The storms and rain damaged wheat and other crops in the plains of Punjab, also disrupting air traffic at the airports, reports said.
The immediate victim of the dust storms in Lahore and elsewhere was the power supply in Lahore and elsewhere.
But dark clouds, intermittent showers and strong winds helped people easily brave the impact of the power outages.
The water and power division officials said the change in weather decreased the power demand.
But they agreed that the major decrease was due to the disruption of power supply by dust storms.
As many as 105 feeders of Lesco tripped after dust storms hit Lahore city last night and on Saturday morning.
The Lesco authorities said all were put on function by the evening.
The Met department said the speed of the storm was 89km per hour at 9.30am.
It was followed by heavy rain.
Dark clouds continued to hang over the city which had another round of rain and strong winds in the evening.
The Met department said the change in weather sharply dropped temperatures in the directly hit cities, and by three to five degrees C in the plains in south Punjab and in Sindh which had faced the brunt of the heat wave.
Lahore's maximum temperature which was 45 degrees C two days ago dropped to 31 degrees C to the much relief of people.
It also dropped to 36 degrees C in Multan and Faisalabad which had been recording over 45 degrees C in the past few days.
Pakistan Kissan Ittehad President Khalid Khokher said hailstorm damaged wheat in Dera Ghazi Khan, and dust storms and rain mango orchards in Multan, Kabirwala and Khanewal.
Reports from central and north-eastern Punjab were pouring in, he said, apprehending damage to crops there too.
The Lahore airport authorities said dust storms on Friday night and on Saturday morning led to cancellation of four flights.
Many were delayed because of the bad weather.
A flight from Islamabad that was scheduled to leave for Lahore at 10pm was late by five hours, and reached here at 3.30am because of poor weather conditions.
Meanwhile, the Met department reported that Pattan received 32mm of rain.
The highest maximum temperature was recorded in Sibbi and Padidan which was 44 degrees C.
The Met department forecast dust-thunderstorm/rain (associated with gusty winds/few hailstorms) at scattered places in Khyber Pakhtunkhwa, Punjab, Islamabad, FATA, Kashmir and Gilgit-Baltistan and at isolated places in Quetta and Zhob divisions in the next 24 hours.