Mass Death and Extinction of the Bees! Could be catastrophic to mankind within four years as many species have dropped by up to 90% 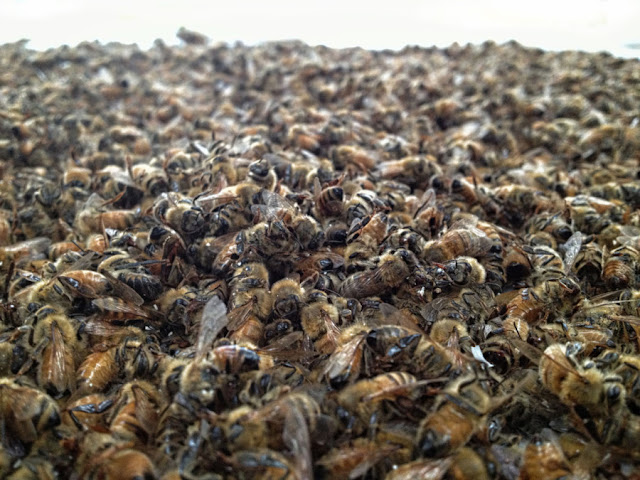 Photo The Huffington Post
In just three years’ time the World will have lost two-thirds of all wild animals.
This amazing statistic from The Living Planet Index goes on: The number of wild animals living on Earth is set to fall by two-thirds by 2020, according to a new report, part of a mass extinction that is destroying the natural world upon which humanity depends.
However what I would like to focus on today is the plight of bees of which Albert Einstein was credited with this quote; “If the bee disappeared off the face of the Earth, man would only have our years left to live!”(There is no proof he actually said this.)
Perhaps the biggest foreboding danger of all facing humans is the loss of the global honeybee population. The consequence of a dying bee population impacts man at the highest levels on our food chain, posing an enormously grave threat to human survival. Since no other single animal species plays a more significant role in producing the fruits and vegetables that we humans commonly take for granted yet require near daily to stay alive, the greatest modern scientist Albert Einstein once prophetically remarked, “Mankind will not survive the honeybees’ disappearance for more than five years.”
Since 2006 beekeepers have been noticing their honeybee populations have been dying off at increasingly rapid rates. Subsequently researchers have been scrambling to come up with an accurate explanation and an effective strategy to save the bees and in turn save us Homo sapiens from extinction.
Extreme weather or climate change will be playing a significant role in the deaths of bees with droughts and extreme cold affecting the bees.
A new government study blames a combination of factors for the mysterious and dramatic loss of honeybees, including increased use of pesticides especially in the US, shrinking habitats, multiple viruses, poor nutrition and genetics, and even cell phone towers. However, according to last year’s joint EPA-USDA study, the biggest cause is the parasite called the Varroa destructor, a type of mite found to be highly resistant to the insecticides that US beekeepers have used in attempts to control the mites from inside the beehives. Moreover, new virus species have been found in the US and several of these have been associated with Colony Collapse Disorder.

In a vicious cycle, since 1987 when the Varroa mite was first discovered in the US, Monsanto, Dow, Bayer and other large chemical manufacturers aggressively glommed onto the bee industry selling genetically modified insecticides and herbicides as the quick and easy fix to remedy the parasitic invasion, only to weaken the bees’ natural genetic defenses to fight off the parasite. In an article from the Guardian earlier this month, Monsanto’s contribution to the vanishing bee population is detailed. From genetically altered corn, Monsanto produced an insecticide called Bacillus thuringiensis (Bt), which once ingested by bees, Bt binds to receptors within the bee’s stomach lining that keeps the bee from eating. Of course this weakens the bee, causing the breakdown of the inner stomach wall, which in turn makes the bee susceptible to spores and bacteria. To further compound the problem, for years the lobbying power of the chemical giant denied causing damage to the bee’s internal immune capacity for resistance to parasites, which of course only continued to kill off the bee population worldwide. Thus, continued chemical use, especially in America, only exacerbates this growing problem.


Also on Greenpeace’s Save the Bees page, a type of insecticide called neonicotinoids is known to cause acute and chronic poisoning not just of one bee, but the entire colony. Bees take the contaminated nectar and pollen spread through the plant’s DNA back to the hive, creating a highly toxic living environment for all the bees. Toxicity builds up destroying the Central Nervous System, causing further disorientation and bees ultimately can neither fly nor make it back to the nest. Meanwhile, unlike the US, in Europe and Australia where the health of insects and humans is deemed more important than corporate profit, laws banning insecticide use have been passed, which in large part has largely saved the bee populations from being so decimated there.

More on Death and Extinction of the Bees here

In February, 2017, more than 10 million bees died in an apiary in the rural area of ​​Porto Ferreira Brazil in less than a week. According to the owner, all the work of almost four decades was lost in the 136 hives due to agrochemicals of sugarcane.


In February 2017; Millions of bees die in massive pesticide poisoning in the Region of Murcia, Spain. Greenpeace and beekeepers report that the pollution event occurred when insecticides were applied to fruit trees.


In February, 2017; Thousands of dead and dying bees are washing up on a popular beach in Southern Florida. Naples beach goers had to watch where they stepped Tuesday after some people say they have been stung just along the shoreline