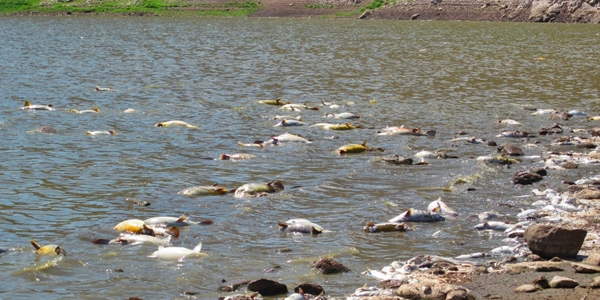 Photo Save the Water
Another algae bloom is thought to be responsible for the deaths of thousands of threadfin shad at Apache Lake in the Tonto National Forest, Arizona
The Arizona Game and Fish Department have investigated the death of thousands of fish and determined the die-off was caused by a golden alga bloom largely restricted to the riverine portion of Apache below Roosevelt Lake.
According to The Arizona Game and Fish Department “Golden algae thrives on elevated salinity associated with drought conditions,” said Marc Dahlberg, Water Quality Manager at AZGFD. “Therefore, recent heavy rains will hopefully knock down salinity levels and help control golden alga blooms.”
At this point, AZGFD believes the fish kill has been restricted to threadfin shad and a few gizzard shad, both of which are highly sensitive to the toxin produced by golden alga.


The last such fish die-off in this region occurred in 2007, also in upper Apache Lake. However, there were significant fish kills caused by golden alga in Saguaro, Canyon and Apache during the early-to-mid 2000s that affected all fish species.