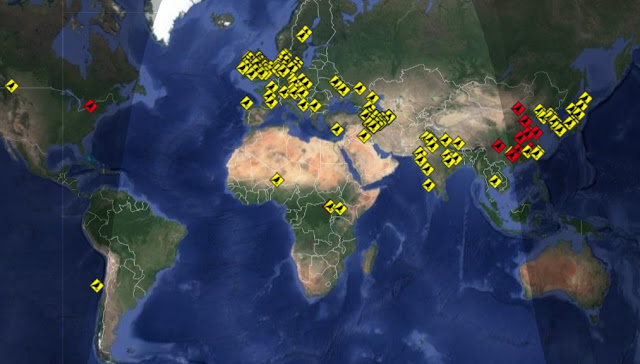 Click on RSOE Alert map to enlarge, red squares indicate humans infected or dead
China is working to assess the prevalence of a new strain of H7N9 bird flu, state radio reported Wednesday, after global health authorities said the strain had evolved into a more severe form in birds.
So far the variant strain has only been detected in Guangdong province, but given the wide circulation of livestock and poultry in the country, it would be difficult to prevent its spread to other areas, the broadcast said, citing the agriculture ministry.
Until now, the H7N9 virus has shown little or no clinical symptoms in birds, despite being highly pathogenic when it infects humans.
But China has detected an evolution in the virus that is capable of causing severe disease in poultry and requires close monitoring, the World Health Organization (WHO) said on Tuesday.
Samples of the virus taken from two infected humans were injected into birds in a laboratory and became "highly pathogenic" for poultry, it said.
But that designation applies only to birds, not humans, WHO spokesman Christian Lindmeier said, and there is "no evidence that the changes in the virus affect the virus' ability to spread between humans."
A total of 304 new laboratory-confirmed human infections were reported in mainland China between Jan. 19 and Feb. 14, along with 36 deaths, the WHO said in its latest update on Monday.
The evolution of the virus may mean that the disease will become more apparent in some flocks, if birds begin to die off, making detection and control easier.
"This is the first time these changes have been detected.
These are the only two cases in Guangdong province, China.
So far, there have been no reports if similar changes have occurred elsewhere," Lindmeier said.
"It is a reminder that we have to keep looking closely," he told Reuters.
Any culling carried out in response to the detection of the virus on farms would be compensated, the Chinese report added.
Animal health experts say bird flu infection rates on Chinese poultry farms may be far higher than previously thought, because the strain of the deadly virus in humans is hard to detect in chickens and geese.
In all, since the "fifth wave" of the virus, first identified in 2013, began in October 2016, 425 human cases have been recorded in China, including 73 deaths officially reported by authorities, according to WHO figures.
"Most of these cases had known exposure to poultry or its environment, that is the main important link to this influenza type," Lindmeier told a news briefing.
In all since 2013, there have been 1,200 laboratory-confirmed cases in China, including more than one-third since October, he said.