2016 was 2nd warmest year on record for U.S.! The National Oceanic and Atmospheric Administration (NOAA) 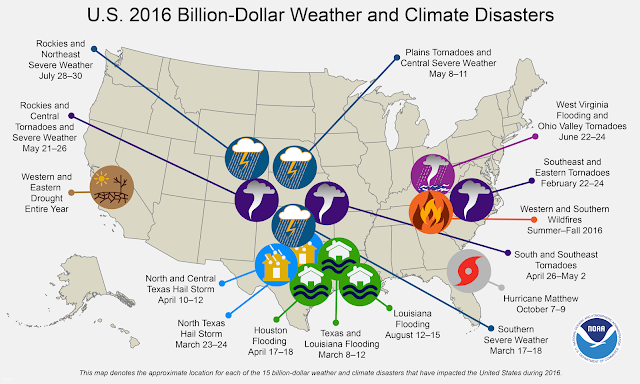 Photo NOAA
The National Oceanic and Atmospheric Administration (NOAA) has just released their annual report for 2016 and concluded, 15 weather and climate disasters caused 138 deaths, and $46B in damages as 2016 was the 2nd warmest year on record for the U.S. since records began.
They go on:  Last year will be remembered as warmer than average for much of the nation, and depending on where you live, 2016 was either parched, soggy — or both.
Full year, January through December
The average U.S. temperature in 2016 was 54.9 degrees F (2.9 degrees F above average), which ranked as the second warmest year in 122 years of record-keeping. This is the 20th consecutive year the annual average temperature exceeded the average. Every state in the contiguous U.S. and Alaska experienced above-average annual temperatures, according to scientists from NOAA’s National Centers for Environmental Information.

Precipitation for the year totalled 31.70 inches, ranking as the 24th wettest year. The national drought footprint expanded from about 18 percent in January to about 23 percent by the end of December. At just under 19 percent, the average area of drought in the U.S. for 2016 was the smallest since 2010.

December
The month of December was near the long-term average for the month with an average temperature across the contiguous U.S. of 32.9 degrees F, 0.17 degrees above average. The north-western quarter of the contiguous U.S. was generally cooler than average for the month, while the southern U.S. and the Atlantic Coast states were warmer than average. The precipitation total for the month was 0.34 inch above normal.
Billion-dollar disasters
Deadly, extreme weather caused major loss of life and damage in 2016.

This is the second highest number of disasters experienced in one year, with double the record number of inland flooding events for one year.

Since 1980, the U.S. has sustained more than 200 weather and climate disasters that exceeded $1.1 trillion in overall damages.