Britain battered by another storm! Blizzard conditions more flooding and 100mph winds bring the UK to it's knees again 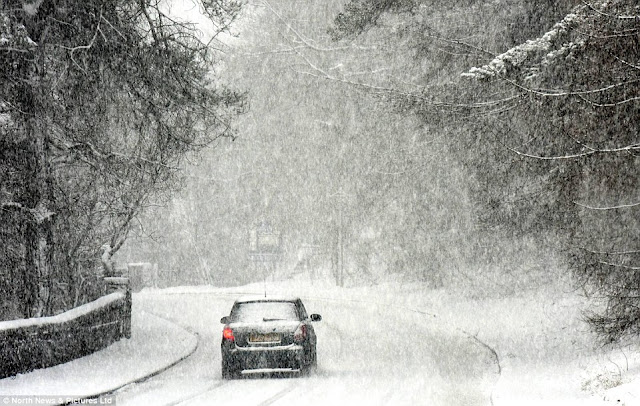 Blizzard conditions are causing travel disruption as Britain is battered by a storm that has led to the cancellation of at least 80 flights at the country's biggest airport.
Heavy snow was lying across Scotland, Northern Ireland and parts of England by Thursday morning. London's Heathrow airport said a combination of snow and windy weather conditions had affected flights.
The Met Office had issued yellow "be aware" warnings of wind and snow for Scotland, warning of gusts of up to 60mph in places and 4in (10cm) to 8in (20cm) of snow on higher ground.
The warnings also extend to northern parts of England as well as Wales and Northern Ireland, where thick snow blanketed Coleraine and Ballymena.
The weather has affected ferry services, with Caledonian MacBrayne warning "heavy disruptions" are expected.
Northlink ferries and Orkney Ferries also warned disruption was likely due to the weather.
The Met Office described the weather as a "real taste of winter" caused by a polar airmass, which originated over northern Canada, spreading south across the UK.
The Forth Road Bridge - which connects Edinburgh and Fife - is open again after it was closed all of Wednesday when a lorry was blown over and damaged the central reservation.
Paul Gundersen, chief meteorologist at the Met Office, said the heaviest and most frequent snow showers are likely across northern and western Scotland, Northern Ireland and around Irish Sea coasts, but eastern coasts will also be affected in the coming days. "Most northern areas are very likely to see snow showers at times over the next few days but the situation over the southern half of England is more complicated," Gundersen said.
"Southern counties of England and Wales can expect a cold and wet day with some heavy rain on Thursday, but there's an increasing chance this will turn to sleet or snow, especially over hills, during the afternoon and evening.
"There is a chance of snow settling, bringing disruption to transport during the evening rush-hour and possibly interruptions to power supplies - this more likely across East Anglia and south-east England. "As skies clear on Thursday night, it is likely to become icy in many areas.
Forecasting snow is always challenging and there's often a fine line between whether it will rain or snow in a particular location depending on slight changes in air temperature."
It follows a wet and windy day on Wednesday for Scotland and the north of England that left homes without power and major travel disruption.
A gust of 93mph was recorded at High Bradfield in South Yorkshire and 82mph at Emley Moor in West Yorkshire.
Engineers worked to reconnect thousands of homes in Yorkshire, Cumbria, Cheshire and the north of Scotland, and will be on standby throughout Thursday.
The Energy Networks Association has reminded people they can call 105 - the new, free national phoneline - if the weather damages their local power network and affects their electricity supply.

Thank you for composing an article that has awesome substance and is elegantly composed and even I am inspired by your written style too.You can refer best resume writing service to get a best guidelines and suggestion to write your resumes.