5 AND 4G is linked to cell and tissue damage, damaging proteins, and DNA and suppressing immune systems, which is probably why Covid-19 has been so destructive in wealthy countries: 73 rich countries are using 5G networks and most of them have done badly with RONA

18 Dec 2020
There has been much speculation around the world claiming a link between 5G and the coronavirus.  While governments and the media have been quick to dispel such claims as not true, there is a connection, according to an NCBI report, (National Institutes of Health, link supplied below), who are claiming doses of charged particles from 5G, 4G can cause acute and persistent oxidative stress which can lead to cell and tissue damage, damaging proteins, and DNA and suppressing immune systems, which is probably why Covid-19 has been so destructive in wealthy countries such as the US and all of Europe but not nearly as destructive in 3rd world, or poor countries.
The 3,500-mile-long, (5,600 km) cloud, dubbed the “Godzilla dust cloud,” travelled 5,000 miles (8,047 km) and has now arrived in the southern US where COVID-19 cases have recently spiked causing concern among doctors.

On June 23, 2020, the GOES-East satellite viewed the Saharan Air Layer (or SAL) over Cuba, while a storm erupted through its dusty haze. During this time of year, the SAL often blows westward from Africa’s Saharan Desert and can travel thousands of miles away. The SAL’s activity usually results in reduced severity--- or in some cases entirely inhibits the formation of---Atlantic tropical storms and hurricanes.'The Godzilla dust cloud' which left the Shara earlier in the month has arrived over the U.S. Southeast, raising health concerns. Forecasters are expecting a thick brown haze raising more health concerns in states where the coronavirus crisis is worsening.
What could it be? Mysterious blue light filmed above my house in February is now showing up in the skies across the world including Australia, Spain, and the United States. 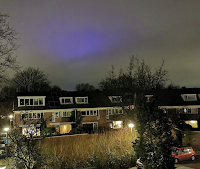 I thought no more about the change purple cloud until today when I stumbled on an article on the Russian website Sputnik International. Apparently, the same purple cloud which Patrick and I caught on camera had been filmed by people all over the world.
Australian Bushfires Create Risk of Drinking Water Contamination: Australians are facing another threat to their most precious commodity, toxic algae bloom from the bushfires.

Australia can’t seem to catch a break in 2020.  After the horrendous bushfire crisis, which killed more than a billion animals, record-breaking heat, crippling drought and this month record-rainfall bringing mass flooding, they are now facing another threat.
Drinking water in Australia is scarce enough in most parts of the country but now the Aussies are facing another threat to their most precious commodity, drinking water contamination from the bushfires. According to Weather.com, the fires torched 42,000 sq miles. Mudslides are washing ash and debris into waterways. Some of the ash and debris contains toxic chemicals from the 3,000 homes which were destroyed in the fires, these homes hosted pollutants and chemicals which have found their way into the water system.
The potential for another animal to human type coronavirus is very worrying here especially if the bats are urinating on people: Australian town suffers a Biblical plague of bats who are urinating on people

Hundreds of thousands of bats have invaded the town of Ingham in Queensland, Australia, and residents are fed up. The bats now outnumber the residents in the town and upset locals have asked their council to do something about it. The animals have caused chaos, with residents complaining about the smell, the dirt and the noise. However, the bats are protected by law and cannot be culled. Local authorities now say they are trying to "persuade" the bats to move back to their habitat. Ramon Jayo says his community is fed up with it. "The stench is horrific when you are under the bats you have little spiders and mites and the bats are peeing on you." The bats now outnumber the residents by the hundreds of thousands.
Environment 2019