Another Powerful Letter From Alaska! A Message From Bill—DID WE LEARN OUR LESSON??? The Flat Screen God William Laughing-Bear 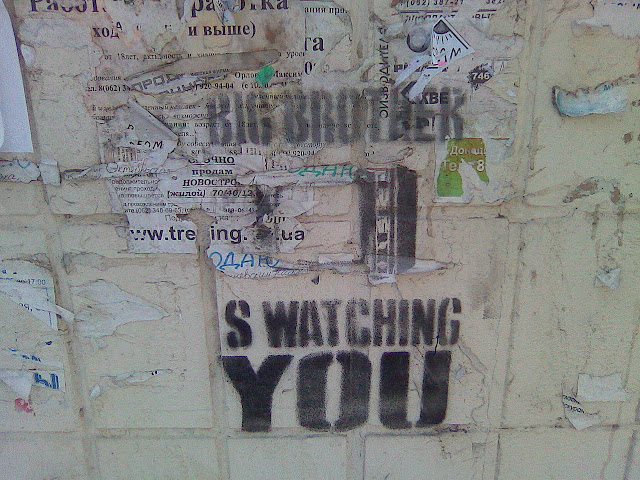 "Big Brother is watching you" painted onto the wall of an industrial building in Donetsk, Ukraine, credit Wikipedia

DID WE LEARN OUR LESSON???

I just finished your post that is under the topic "Boogaloo 2022" that you posted for Tuesday, 5 April 2022. As usual a powerful post containing facts that some who read books remember from past years when we thought for ourselves. It saddens me that history is not taught with truth, at least here in the U.S.

I, this week, posted my thoughts in your write titled, “Signs and Wonders,” which was presented to us on 30 March this year. I mentioned my old high school teacher, Mr. Springer. Because he was in his sixties back then, I am positive he is now gone since he would be well over a hundred-years-old by now.

Back then he warned us to read all the history we could from the oldest books we could find. He informed us that in the future, tragic world events would soon be swept under the proverbial carpet. Events like the Holocaust would be the first to disappear from books or taught that it was just a big lie, that it did not happen. Such things like our Declaration of Independence and our Bill of Rights were already being swept away as they were no longer being taught in school like they had been when this Alaskan was in his early years of school. The Pledge of Allegiance was being phased out and would one day not be recited each morning as we students did every morning as we stood with our right hand over our chest and faced our nations flag.

He went on to say that the computer would become a stronger and stronger work-horse, delivering to the American sheeple the lies they pushed as truth. T.V., radio, and the movie industry were already active in this and to expect a deepening deception in the future years to come. He explained to us that we had an obligation to know the truth and teach it to our future children. This was all stated before he had us read, as a class, the book Fahrenheit 451. We were warned that the fire written about in the book Fahrenheit 451 had started. If you have ever read that book, you’ll remember that the firemen of the future did not put out fires, they started them by burning down houses that contained books. Yes, Mr. Springer said this fire had already started and was burning to erase the truth of past history.

He then made us read, as a class, three other books which were: Brave New World, 1984, and Animal Farm. Wow! As I look at events unfolding with this Great Reset, I see the truth shared in the Animal Farm book beaming brighter than ever before. One sees the villains like Klaus Schwab, Bill Gates, and others like George Soros turning like the pigs did into the humans with their program of keeping control of the Animal Farm, all under The Great Reset. I have not seen these books in years and have no idea if one can even still get them. They may be like the banned book, “The-Adam & Eve-Story,” removed years ago! Oh yes, the other two reads that were required are in the forefront of my mind. Yep! Let's all be chipped and tracked. Let's all get a poke of Satan's Spit so that graphene oxide, that kills our bodies, can be tracked and used to control our thinking. Hey everybody, be sure you are plugged into 5G!!!, that way Big Brother will have a much easier go at keeping you with the sheeple, all penned in. 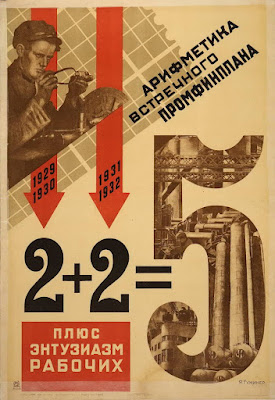 A 1931 poster for the first five-year plan of the Soviet Union by Yakov Guminer [ru] reading "The arithmetic of an industrial-financial counter-plan: 2 + 2 plus the enthusiasm of the workers = 5." Credit Wikipedia

This teacher, as well, told us not to listen to the news, it would be mostly lies. He stated, "focus on the pictures and what is happening in the distance behind the reporter." Of course, with the way they can now alter pictures with A.I., that doesn’t work near as well. And know that all you say is noted in a system somewhere! It is best to get the news of events directly from a trusted source that was there. He stated the radio, TV, and computer would become more and more controlled as the sheeple would need to come to their altar to receive wisdom, hope, and power.

And the biggest earthquake he imparted on my class shocked most of us like a 9.0 earthquake. He explained, "do not just look at the other governments of the world and think they are the evil ones and we are the pure ones." He went on to say that during WW II, he had served in the South Pacific. His job, he told us as he sobbed, was to kill Japanese prisoners. He stated he was part of a small detail of soldiers who were given orders to commit an evil beyond belief. He stated what his group of men were called but it has been so many years I do not recall its identification. He went on to say that as the war went on, the U.S. was capturing so many prisoners they could not handle them all. So, his group's job was to have them stand together while he and some others took machine guns and mowed them down. Then they were buried in mass graves dug out with bull dozers and covered with the dirt with these same pieces of equipment. This was to hide the evidence.

He went on to say the U.S. was not the only one of the countries that fought the Nazis and Japanese that did such. And with tears like I have never witnessed since, he said, "I have to live with this. I am haunted by this evil I did to men who had surrendered. I can still see their terrified faces as I mowed them down." He said, "I just hope in death this will finally leave me alone." I do not believe there was one of us that day in class who did not have tears streaming down their faces. And he stated, "you will never read about this war crime I was party too, and if by chance you do, it will be reputed as a lie."

So... here’s to you Mr. Springer. I have listened well and I am, after over forty years, sounding the cry of truth you were venerable enough to teach, "America is not all that and a bag of chips.” And thank you, Sir, for teaching me to think for myself and to be careful not to have sheep in my circle. And, Sir, you inspired this poem titled, “The Flat Screen God.” Thank you.

Now, this poem was written from the perspective of an ugly god and the language is not recommended for children. But, as I learned years ago in a writing class, if you use a word that is not one that flows regularly from your lips, it is like using a sledge hammer to prove a point.

Once again, I quote Aldous Huxley: “Facts don’t cease to exist just because they are ignored."

That’s it from Alaska for now. Bill Laughing-Bear 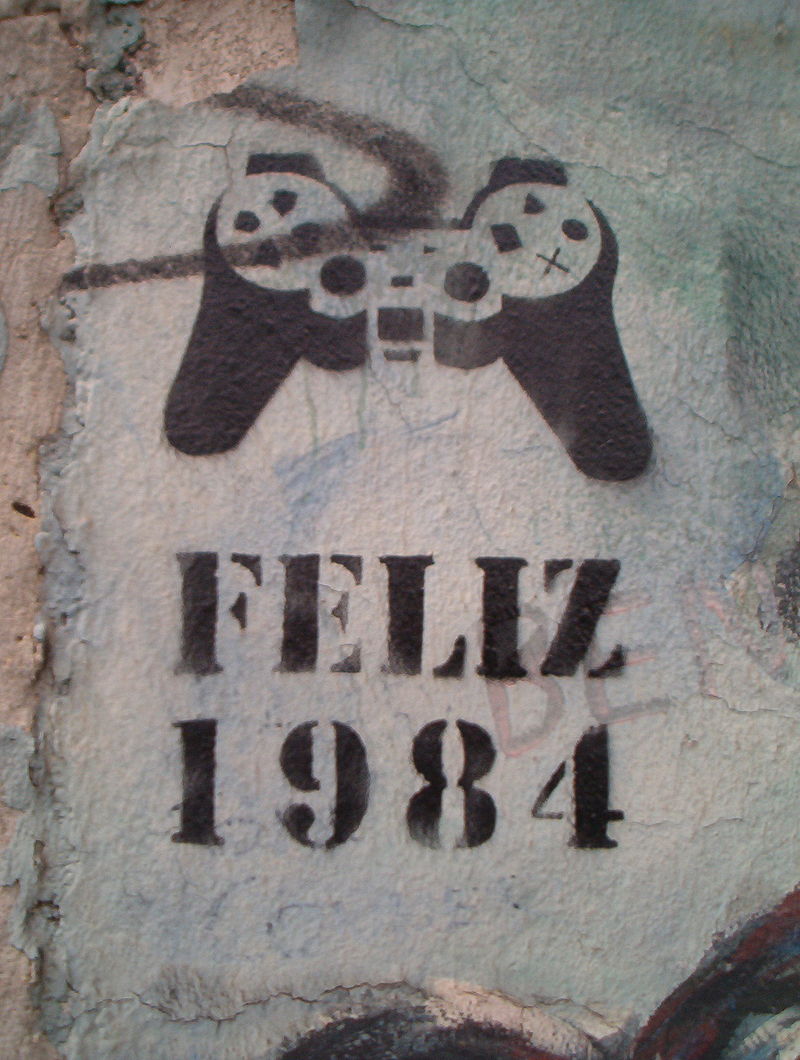 "Happy 1984" (in Spanish or Portuguese) stencil graffito, denoting mind control via a PlayStation controller, on a standing piece of the Berlin Wall, 2005

I, the Flat Screen god, call in the middle of the night,

Come worship at my altar; I’ll fill you with insight.

You need me, come bask in my altar’s light,

In your home, make my altar the prominent sight.

I have all answers, watch your gods, next T.V. show,

Seek me on the Internet, let my wisdom flow.

Place your children before my altar, I’ll train them up to see;

I’ll teach them what I want, and need them all to be.

I show you shit you really need to buy;

And who is worthy or really ought to die.

Let’s look at what makes you … smell and look just right,

How to eat and drink … so that dress is a perfect sight.

Lets gloat over those I hate and dearly love to devour.

I teach you morals, you’ll know right from wrong;

Who your enemy is, with whom you do belong.

Don’t write letters … or bother picking up the phone;

I, the Flat Screen god, prefer you E-Mail alone from home.

Never messages you wrote, you know they could provoke.

It’s okay to lust women and kill that f***ing Jew.

While you’re at it hate Muslims along with Christians, too.

Stay away from thinkers, those who talk and read books;

They are the diseased few to whom you should not look.

I, the Flat Screen god, can saturate your soul with power;

Come to me all weary, you who don’t think I’ll fill by the hour.

Oh, my dearest lamb you’re a clone, come to my steeple;

On my altar you’ll find wisdom, hope, and power….my sheeple.

Dedicated to Mr. Springer who taught me to not seek truth at the Flat Screen's altar.

Dear brother, I thank you once again for your wonderful contribution, not just to my blog but to my life as well. . .

Wow Bill awesome story.I have enjoyed your comments and stories over the years through Garys blog.One of the things that strikes me in this story is,how did he know,so many years ago.Was it intellegence or maybe more.Everything he said is happening now.Something to think about.

Bill and Gary, you have opened my eyes, and I will cry and cry... thank you

Sounds like the brief for the film 'Dead poets society'. No wonder they bumped off Robin Williams.

They won wars by killing people. That's their job. Don't like it? Don't join the army.

The red chinese have boasted that they can raise a 200,000,000 man army. That means they would not have to fight a war with the U.S. at all. Their entire army could simply surrender and then, under the "rules of war", the US would be forced to take them all in as prisoners of war.
So with a total of about 160,000,000 employed U.S. citizens, every single breadwinner in the US would have to support at least one chinese prisoner of war.

Anyone seriously thinking government is not evil is pretty naïve. The founders called government a necessary evil and did their best to circumscribe its ability to do evil. Lincoln showed the founders failed because you can't maintain a constitutional order without the citizens themselves forcing government to obey. The citizens, alas, showed they didn't posses the virtue required to be self governing and let the government go its own way.