After a mighty X-class flare and strong geomagnetic storms another massive, mag 7.2—Reduced to a mag 7.0 by USGS along with 13 large aftershocks rock the South Pacific's Loyalty Islands! Two tsunami warnings issued for Fiji, New Caledonia and Vanuatu have been been lifted 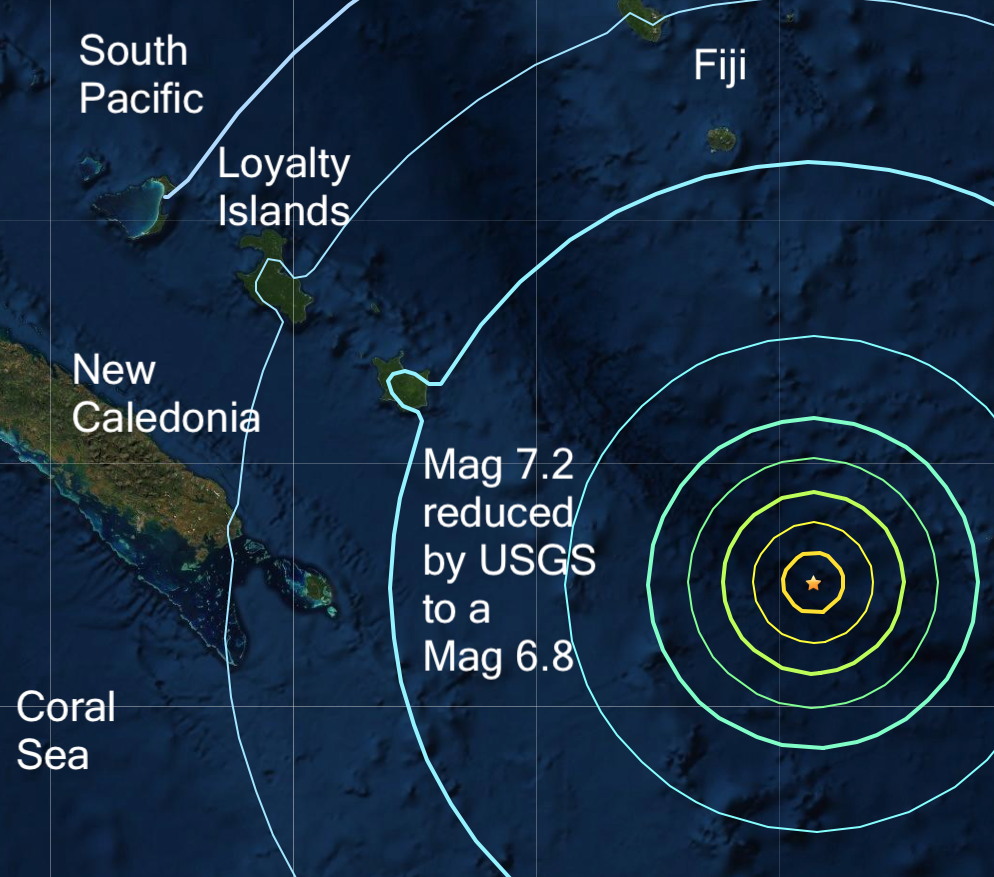 Map USGS
A very powerful and shallow mag 7.0, reduced from mag 7.2 by USGS has rocked the Loyalty Islands in the night. It comes after the powerful mag 6.9 which struck earlier last night, I did mention in my report we could expect more major quakes, (mag 6 or higher) during the night. Full story here
13 large aftershocks have also struck the islands. I can't find any information of damage or injuries at this moment. Two tsunami warnings issued for Fiji, New Caledonia and Vanuatu have been been lifted, according to the Pacific Tsunami Warning Center (PTWC).
Why was I expecting major quake action during the night?
Well,—the earth's magnetosphere was experiencing strong geomagnetic storms during the night when a fairly powerful cannibal CME rocked our planets defences. During such storms, naked-eye auroras can be seen in the night sky much further south than normal—Reports claim they were seen last night as far south as South Dakota in the US—I did wearily get out of bed at 5-o-clock this morning, here in Holland but it was cloudy, so I went back to sleep!
What is a cannibal CME?
Do solar flares or magnetic storms (space weather) cause earthquakes?
According to the USGS, solar flares and magnetic storms belong to a set of phenomena known collectively as "space weather". Technological systems and the activities of modern civilization can be affected by changing space-weather conditions. However, it has never been demonstrated that there is a causal relationship between space weather and earthquakes. Indeed, over the course of the Sun's 11-year variable cycle, the occurrence of flares and magnetic storms waxes and wanes, but earthquakes occur without any such 11-year variability. Since earthquakes are driven by processes in the Earth's interior, they would occur even if solar flares and magnetic storms were to somehow cease occurring—However, , , during my 14 years of research I have clearly seen and come to expect large quakes here on Earth during magnetic storms—"Space weather."—Last night was no exception, see the graph below.

The K-index, and by extension the Planetary K-index, are used to characterize the magnitude of geomagnetic storms. Kp is an excellent indicator of disturbances in the Earth's magnetic field and is used by SWPC to decide whether geomagnetic alerts and warnings need to be issued for users who are affected by these disturbances. The principal users affected by geomagnetic storms are the electrical power grid, spacecraft operations, users of radio signals that reflect off of or pass through the ionosphere, and observers of the aurora.

The X-class flare, shown on the GOES X—Ray Flux Data is expected to impact our magnetosphere on April the 2nd—Which will produce more fireworks and maybe—More major quakes!
Earthquakes-2022
Spaceweather 2022
Home
at March 31, 2022

I have read that the USGS takes 1 to 4 points off the reported size of earthquakes, to keep people from being alarmed by the massive increase in numbers. They also, don't report those in remote areas that are not likely to be noticed. Many who keep an eye on the USGS web site, have seen quakes reported and then removed.