Peace, dignity, and equality on a healthy planet? The finest example of "UN doublespeak" you could ever imagine!
Back in 1945, just as WWII was coming to a close, nations around the world had been left in ruins and craved peace. Representatives of 50 countries gathered at the "United Nations Conference on International Organization" in San Francisco, California from 25 April to 26 June 1945. For the next two months, they proceeded to draft and then sign the UN Charter, which created a new international organization, "the United Nations," which, it was hoped, would prevent further cataclysmic events such as the two successive world wars, genocide, a devastating influenza pandemic, a worldwide economic depression, and crippling hunger and poverty across the war-torn world.
But first, the Japanese would have to be brought to their knees with not one nuclear bomb, but two, killing hundreds of thousands of innocent victims in Hiroshima and Nagasaki. Why two? One would have done the job, surely?
By 1946, with the dust still settling from WWII, a new kind of war had started, a cold war, fought mostly by sponsored proxy states, doing the dirty work of the Left-Wing Communists or the Right-Wing Capitalists. Nuclear proliferation also increased to a point where today, mankind could destroy the wonderful world given to him by God, no, God will not allow that to happen, God, Himself tells us He will destroy those who are destroying His world.
By the end of the sixties, a new epidemic had arrived, death had been introduced onto our streets by anti-Zionists, Islamic zealots, Right-Wing extremists, and Irish sectarianism as well as President and public figure assassinations, bringing a new meaning to the word domestic terrorism. Riots and demonstrations from dejected citizens wanting to protest everything from race, equality, anti-war better working conditions, and the right to be homosexual brought anarchy onto our leafy avenues with protesters, screaming, kicking, burning, and looting in cities across the West, from California to Berlin. After 9/11 and the attack on the twin towers, The then-American president, Mr.George W. Bush declared a war on terror and sent his troops to the four corners of the world to fight a new crusade. Last month and twenty years later that crusade came to an end with the sudden and chaotic removal of troops from Afghanistan.
This month, The Charter of the United Nations is being hailed as an exceptional achievement... Really?
They concur in their smug and comforting manner... Since 1945 international norms and institutions have delivered independence, peace, prosperity, justice, human rights, hope, and support for billions of people... Really?
Well, let's have a look at their achievements since 1945 shall we.
Peace?
Conflicts around the world are on the up with China, Russia, Iran, and Turkey all licking their lips watching the divisions in the US. WWIII could happen anytime, it just needs a trigger happy Ayatollah or Rocketman to set the whole thing into motion. China is eyeing its neighbor Taiwan as I type this post and Kim Jong Un has his eyes on his neighbors too. That nasty hateful Iranian despot would love to wipe Israel and the US off the map and Russia is just waiting for the right time to goose march into Ukraine.
And what has happened to our weather? 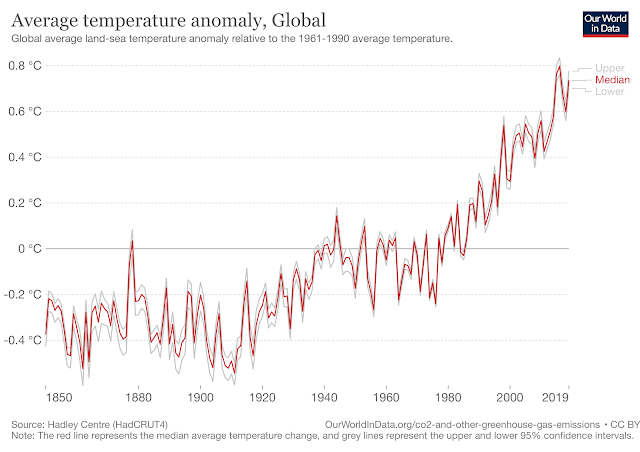 Yes, our planet started warming around the time the UN was formed!
Dignity?
Since 2020, Covid-19 is destroying our mental and physical health, our economy and livelihoods are being slowly dismantled and the most vulnerable people in the world, the old, sick, and poor, are the ones taking the brunt, same as it ever was.
Equality?
For those people, trying to hack life in an unliveable place, millions of them by the way, poverty, discrimination, violence, and disease are denying their very right to life.
A healthy planet?

Country-sized fires burning out of control, monster storms, droughts, record-rainfall, massive floods with waters rising so fast people can't escape, heatwaves, cold waves, and record snowfall, it's madness and for many, unliveable, yes for many, our wonderful world is unliveable.
The West has lost its grip on the morality war. Trust and solidarity have gone but yet, we are told, ad nauseam we have to work together, hand-in-hand if we are to save the planet. Believe me, when I say, the planet is gone, we are living on borrowed time. There is no "sustainable future."
Many of you who may be new to The Big Wobble will be shocked to read that since the '70s, animal life has fallen by more than 60%!
Imagine if the human population fell by 60%. Well, it will and very soon too.
That would be like emptying the Americas, Europe, Africa, Oceania, and China of people... The monarch butterfly has had a 95% decline since the 1980s in North America: Two-thirds of ALL animals and insects are thought to be extinct in 2021. The World has lost two-thirds of all wild animals since the late '60s, early '70s. Billions of animals are dying annually around the world. Billions of songbirds are thought to have been lost in the US alone. Sea birds are dying in incredible numbers around the world due to a lack of fish.
The analysis, the most comprehensive to date, indicates that animal populations plummeted by 58% between 1970 and 2012, with losses on track to reach almost 70% by 2021. Researchers from WWF and the Zoological Society of London compiled the report from scientific data and found that the destruction of wild habitats, hunting, and pollution, and climate change were to blame.
In another report released by the journal "Science, "Advances are claiming the world's primates face an "extinction crisis" with 60% of species now threatened with extinction, according to research. A global study, involving more than 30 scientists, assessed the conservation status of more than 500 individual species. This also revealed that 75% of species have populations that are declining.Add to this the unprecedented death of millions of tons of marine life around the world’s oceans and waterways all point to a crisis that has crossed the tipping point.The world is creaking under the stress; crops are failing all over the world due to extreme weather, and with 7.5 billion people we can’t possibly feed everyone, even though the West probably throws away enough food to feed the poorest.
All the chaotic problems above began to happen when the UN announced to the world that representatives of 50 countries gathered at the "United Nations Conference on International Organization"  in San Francisco, had signed the UN Charter, which would create a new international organization, called "the United Nations."
It was hoped, this new organization would prevent further cataclysmic events such as the two successive world wars, genocide, a devastating influenza pandemic, a worldwide economic depression, and crippling hunger and poverty across the war-torn world. They have actually delivered our death knell.
The 'UNs Common Agenda
Boogaloo 2021
Front Page Headlines

It is One World: United Nations, United Religions, G20 economic union. A brave New World! A triumph for the 1 percent. Not so great for the rest of us...

Add to this the unprecedented death of millions of tons of marine life around the world’s oceans and waterways all point to a crisis that has crossed the tipping point.
What is the effect on sea life going to be when Japan releases millions of tons of Radiated water into the Pacific Ocean?

Excuse me, but....what is the effect on sea life going to be "when" Japan releases millions of tons of radioactive water in to the Pacific???! Hello.....you been sleeping for too long anonymous, your reading about that effect in Gary's posts here because Japan has been releasing radioactive water in to the Pacific since day one of that "accident".
How are we ever going to survive these end of days with comments as that one reads?! Bill in Alaska has been writing in of those effects, Gary has been writing of those effects, anonymous did you just tune in?

Biggest threat to life is that America has just said they want a two state solution to the Israel 'problem'. If the world divides Israel then God will divide the world.

#Hawkeye, as climate chaos/manipulation increases people of all walks of life are "waking up" and realizing a certain group of people, let's say 1% of the world's population are hell-bent on destroying our world for greed. If Bill's radiation readings are correct and I sincerely believe they are then his findings would indicate most of the North Pacific is poisoned. But we don't have to take Bill's word... American and Canadian fish contaminated.

Back in 2017, A study by the University of Hawaiʻi at Mānoa revealed almost 50% of fish consumed on the islands of Hawai’i were contaminated with caesium 134 the radioactive finger-print of Fukushima. The report also showed that migrating organisms can transport the Fukushima-signature (caesium 134) over significant distances as they showed detectable 134Cs (6.3±1.5 Bq/kg) in Pacific bluefin tuna caught off the California coast only a year after the incident. Another study found caesium 134 in longfin tuna (Albacore) along the western coast of the US just one year after the Fukushima disaster.

Yet I will remember my covenant with you in the days of your youth, and I will establish for you an everlasting covenant.

Yes Gary, I know of all you replied and see it and agree with Bill's readings and all you have said! Why you telling me though? I was mocking that comment by anonymous saying otherwise! Tell him!
And thank you!

But that's my point, stop mocking people, there is no need for it.