Leeds as it is today, a long way from the dour dark days of the '70s, credit Wikipedia.

If the 60s were “swinging,” the '70s was a dark, depressing decade on both sides of the Atlantic and in many ways the beginning of the end for Anglo-American domination around the world. As a Brit living in Leeds, a drab grey concrete, and red-bricked sprawling industrial city in a very dull, rain-soaked Northern England. My memories of the 70s are a depressing nightmare of general strikes, incompetent governments, riots, and social uprising, all washed down with warm beer and super-strong mugs of Yorkshire Tea, the biggest empire the world had ever seen was just a distant memory as militant Union bosses dragged the country to its knees; A three-day working week was introduced in the UK in 1974 because for two working days a week the country had to go without electricity to conserve coal, the National Coal Workers were striking for better pay and conditions.

The country as a whole was being battered by national strikes. Rat infested rubbish-filled city streets piled high with rotting waste as striking council workers refused to collect refuse on many occasions. Thugs, Football hooligans, and punks owned the streets. The Irish Republican Army (IRA) bombs targeted and terrorized drinkers and shoppers alike as pubs and town centres became the target of the IRA's bombing campaign, many Brits were murdered. The dire mood of the nation was captured by anti-establishment youth culture and a labour force that knew only how to strike. Anarchy ruled the UK. If you didn’t own a big chip on your shoulder there was something wrong with you! 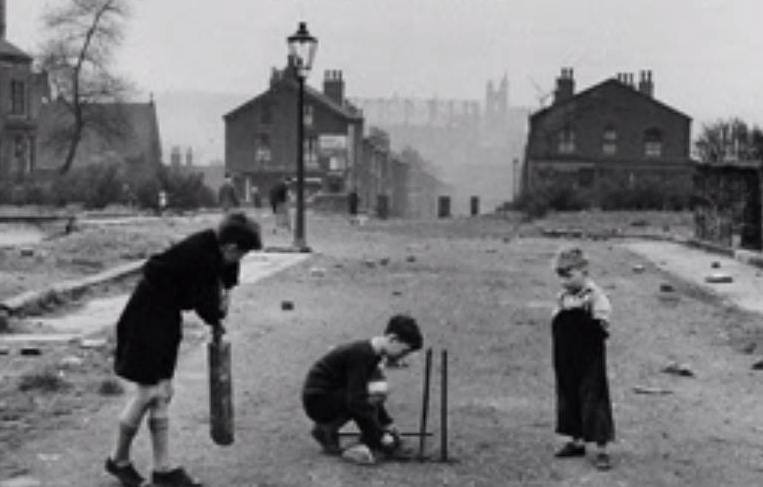 Not for the faint-hearted, Leeds in the '70s, kids playing cricket in the ghetto. Credit Wikipedia.
While the IRA terrorists wreaked havoc in the UK, International terrorism was introducing itself to the world. The 1972 Olympic Games in Munich, West Germany was remembered not for its sporting achievements but for terror and death when a group of Palestinian terrorists called, Black September, kidnapped nine members of the Israeli Olympic team and killed two of them. A failed attempt to rescue the Israelites resulted in 5 Palestinian terrorists and all the Israeli Olympic hostages being killed.

The ‘70s was malignant cancer that began the “American decline,” or the diminishing power of the US, geopolitically, militarily, financially, economically, socially, and in health and the environment. They lost the Vietnam War, fleeing Saigon in 1975 after invading Cambodia. The Watergate scandal saw the resignation of President Nixon. The ‘73 oil crisis shook the world and the decline of American industrial towns and cities, such as Detroit, began. Tension with Iran exploded and the civil rights riots continued. Some experts have claimed the 70s was the worst decade in history for the West.

According to Nicholas Kristof, since the end of the 1970s, something has gone profoundly wrong in America. Inequality has soared. Educational progress slowed. Incarceration rates quintupled. Family breakdown accelerated. Median household income stagnated.

Let's jump forward to Sept 2021, the UK is witnessing a new breakdown of social and civil order which is causing the government and its country's population to look over their shoulders nervously back to the '70s.

This weekend, long lines of cars and trucks are queuing at gas stations for petrol which isn't there. Ugly fights have erupted between customers across garage forecourts across the country as frustration and anger reach fever-pitch. Empty shelves are greeting shoppers at supermarkets, gas and electric prices are climbing exponentially causing energy firms to collapse overnight, and that great unstoppable "behemoth," inflation has taken on a frightening run.

After 18 months of a pandemic lockdown, Britons have awakened to a different world, a world of rising prices and shortages. A massive labour hole has opened due to the UK walking away from Europe. Brexit has caused a shortfall of more than two million foreign workers. Foreign workers who did work the British themselves do not like doing: Driving trucks, factory, and agricultural work.

Worse still, energy prices have just gone ballistic, causing seven major energy firms to go bust just this week in the UK. It's not just in the UK but the whole of Europe. The poor will suffer the most, of course, they always do.

Now Boris Johnson will have to raise wages to tempt key workers to fill the void which will drive up the inflation rate even more which is now at its highest since 2017, in 1975 the inflation rate hit almost 25% in the UK. All things considered, this could be another winter of discontent for the nervous British Government.

The situation is not much better in the US. On July 8, 2021, President Joe Biden stated that: "The likelihood there’s going to be the Taliban overrunning everything and owning the whole country was highly unlikely.

Last month the US military left Afghanistan sneaking away in the middle of the night leaving thousands of Afghanistan helpers stranded at Kabul Airport with scenes replicating the escape from Saigon in 1975, with Joe Biden washing his hands of the Afghanistan people in one of the worst cowardly acts I can remember.
And in reference to Pontious Pilate, washing his hands against Jesus, Biden's statement of 'washing hands' of Afghanistan 'is one of most shameful in US history.
In 1965, just three years after JFK was killed the US entered the Vietnam war after a North Vietnam attack on a US military ship, sponsored by China and Russia. After more than 200,000 American deaths and injuries and the death of 250,000, South Vietnam soldiers and two million civilians. South Vietnam surrendered to the communists and America literally fled Saigon. The fleeing of Saigon shocked the world. The event marked the end of the Vietnam War and the start of a transition period to the formal reunification of Vietnam into the Socialist Republic of Vietnam.
In the year 2001, the US along with their coalition of military allies invaded Afghanistan to oust the then de facto government of the Taliban after they refused to hand over Osama Bin Laden to the Americans.
This month, 20 years later the Americans fled Afghanistan in the dark of the night handing the country back into the arms of the Taliban. leaving millions of people, especially women and kids in the desperate hands of the Taliban. The void left by the Americans will surely be filled by the Russians and Chinese once again. The latest, shameful act will damage America's already badly dented world image who's an image of themselves is widely apart from what the rest of the world thinks of them. It is a shame.
According to the Johns Hopkins University Covid-19 is officially the most deadly outbreak in recent American history, surpassing the estimated U.S. fatalities from the 1918 influenza pandemic

Reported U.S. deaths due to Covid crossed 675,000 on Monday, the 20th of Sept, and are rising at an average of more than 1,900 fatalities per day, Johns Hopkins data shows. The nation is currently experiencing yet another wave of new infections, fueled by the fast-spreading delta variant.

According to CNBC, U.S. stocks began this week deeply in the red as investors continued to flock to the sidelines in September amid several emerging risks for the market. The S&P 500 fell 1.7% to 4,357.73, posting its worst daily performance since May 12. It was a broad sell-off with each of the main 11 sectors of the benchmark registering losses. The Dow Jones Industrial Average lost 614.41 points, or 1.8%, to 33,970.47 for its biggest one-day drop since July 19. The tech-heavy Nasdaq Composite dropped 2.2% to 14,713.90. Incredibly the stocks bounced back once again but for how long?

Domestically, the US is preparing for a mass shutdown of farms and agriculture businesses as climate chaos and government sanctions have hit farmers particularly hard this year. The latest setback is the rising cost of chemical fertilizer hitting farmers already struggling to produce food during rising costs.

And this week the rumour mill has been claiming Ex-President Trump is up and ready for another election fight with Joe Biden in 2024 which will further dissect the already divided population.

The really shameful thing about our involvement in Afghanistan is that in 2001, the Bush administration chose to commit the USA to a fool's errand that had no hope of working; there was almost no chance of converting Afghanistan from a primitive Muslim country into a functioning democracy at the point of a gun. To build coalitions in that country, our forces allied themselves with war lords who would rape children in their tents while our troops were instructed to ignore their screams, as reported by the New York Times and Washington Post in 2016. A withdrawal and Taliban takeover of most of that country was inevitable, though the Biden Administration made the absolute worst of it by leaving behind 80 billion dollars worth of weapons and thousands of potential hostages. I believe creating a small enclave, similar to Taiwan or W. Berlin, for those escaping the Taliban and protecting it with a border of smart land mines would have been the most humane way to disengage, but short of that, we could at least have destroyed our weapons and rescued our own citizens while shipping friendly Afghans to other Muslim countries. Now, we are facing the fact that 20 years of blood and treasure has been wasted for nothing, and we are stuck with an influx of totally unscreened migrants, some of whom might be sympathetic to the forces we were fighting.