Boogaloo 2021!: A weekend of tension around the world shows birth-pangs in 2021 are ramping up: China threaten Taiwan: Chinese and Indian troops brawl on contested border: Japan threat! 3,300 arrested in Russia, riots in Holland, Denmark, Pakistan and Israel

Netherlands: Anti-lockdown protest wreaks havoc in Eindhoven.
A weekend of tension around the world shows birth-pangs in 2021 are ramping up!
Chinese and Indian troops have reportedly clashed again in a disputed border area, with injuries on both sides, Indian media say. The incident took place in north Sikkim last Wednesday. Tensions are high along the world's longest disputed border. Both sides claim large areas of territory. At least 20 Indian soldiers died in a skirmish in the Ladakh area last June. It happened at Naku La in north Sikkim, the media reports said. Sikkim is an Indian state sandwiched between Bhutan and Nepal, about 2,500km (1,500 miles) east of the Ladakh area. A Chinese patrol tried to enter Indian territory and was forced back, the officials said. One source told the Times of India that both sides brought in reinforcements after a "brawl" but there was no gunfire and the situation was under control. China's foreign ministry spokesman Zhao Lijian did not give details of the incident but said China's troops were "committed to upholding peace" and urged India to "refrain from actions that might escalate or complicate the situation along the border" reports the BBC.
Taiwan has reported a large incursion by Chinese warplanes for the second day running, a show of force that coincides with the first days of US President Joe Biden's term of office. Sunday's operation involved 15 aircraft and followed a similar drill that led to a warning from Washington. China sees democratic Taiwan as a breakaway province, but Taiwan sees itself as a sovereign state. In the US's first public remarks on Taiwan since Mr Biden came into power, the US State Department reaffirmed its "rock-solid commitment" to helping it defend itself. There has been no official comment from the Chinese government. Taiwan's defence ministry said eight Chinese bomber planes capable of carrying nuclear weapons, four fighter jets and one anti-submarine aircraft entered its south-western air defence identification zone on Saturday. Sunday's operation involved 12 fighters, two anti-submarine aircraft and a reconnaissance plane, the ministry said. On both occasions, Taiwan's air force warned away from the aircraft and deployed air defence missile systems to monitor the planes.
Meanwhile, Japan becomes the latest nation to contest Beijing’s claims in the South China Sea.
TAIPEI (Reuters) - A U.S. aircraft carrier group led by the USS Theodore Roosevelt has entered the South China Sea to promote “freedom of the seas”, the U.S. military said on Sunday, at a time when tensions between China and Taiwan have raised concern in Washington. U.S. Indo-Pacific Command said in a statement the strike group entered the South China Sea on Saturday, the same day Taiwan reported a large incursion of Chinese bombers and fighter jets into its air defence identification zone in the vicinity of the Pratas Islands. The U.S. military said the carrier strike group was in the South China Sea, a large part of which is claimed by China, to conduct routine operations “to ensure freedom of the seas, build partnerships that foster maritime security”. “With two-thirds of the world’s trade travelling through this very important region, it is vital that we maintain our presence and continue to promote the rules-based order which has allowed us all to prosper,” Verissimo said in the statement.
BEIJING (Reuters) - China passed a law on Friday that for the first time explicitly allows its coast guard to fire on foreign vessels, a move that could make the contested waters around China more choppy. China has maritime sovereignty disputes with Japan in the East China Sea and with several Southeast Asian countries in the South China Sea. It has sent its coast guard to chase away fishing vessels from other countries, sometimes resulting in the sinking of these vessels. According to draft wording in the bill published earlier, the coast guard is allowed to use “all necessary means” to stop or prevent threats from foreign vessels.
MOSCOW (AP) — Russian police arrested more than 3,000 people Saturday in nationwide protests demanding the release of opposition leader Alexei Navalny, the Kremlin’s most prominent foe, according to a group that counts political detentions. The protests in scores of cities in temperatures as low as minus-50 C (minus-58 F) highlighted how Navalny has built influence far beyond the political and cultural centres of Moscow and St. Petersburg. In Moscow, an estimated 15,000 demonstrators gathered in and around Pushkin Square in the city centre, where clashes with police broke out and demonstrators were roughly dragged off by helmeted riot officers to police buses and detention trucks. Some were beaten with batons. Navalny’s wife Yulia was among those arrested. Thousands took to the streets of cities across Russia on Saturday as part of demonstrations organized by supporters of jailed opposition activist Alexey Navalny, as rallies in Moscow and St. Petersburg descended into violence. Dramatic footage of authorities clashing with demonstrators in the capital has been shared widely online as Russia’s statutory jail watchdog put the number of arrests in Moscow at above 3,000. Riot police worked through the afternoon to disperse crowds from Pushkin Square, in the centre of the city, as protesters scuffled with officers, according to RT. 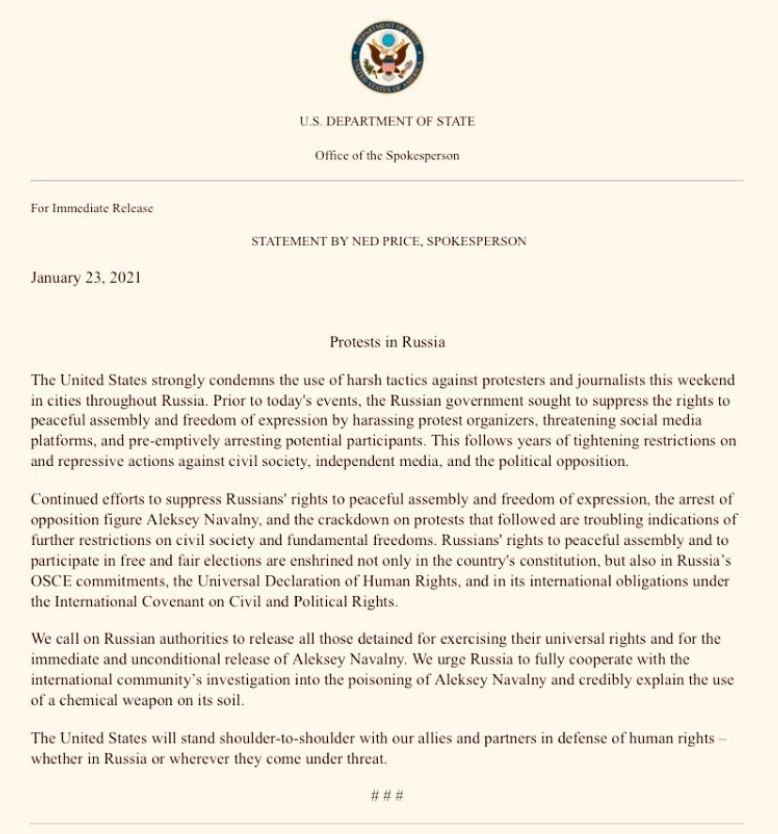 THE HAGUE, Netherlands (AP) — Rioters set fires in the centre of the southern Dutch city of Eindhoven and pelted police with rocks Sunday at a banned demonstration against coronavirus lockdown measures, while officers responded with tear gas and water cannons, arresting at least 55 people. Police in the capital of Amsterdam also used a water cannon to disperse an outlawed anti-lockdown demonstration on a major square ringed by museums. The video showed police spraying people grouped against a wall of the Van Gogh Museum. In Eindhoven, 125 kilometres (78 miles) south of Amsterdam, a central square near the main railway station was littered with rocks, bicycles and shattered glass. The crowd of hundreds of demonstrators also was believed to include supporters of the anti-immigrant group PEGIDA, which had sought to demonstrate in the city. Eindhoven police said they made at least 55 arrests and warned people to stay away from the city centre amid the clashes. Trains to and from the station were halted and local media reported plundering at the station. Police said more than 100 people were arrested in Amsterdam. Dutch media reported unrest in other Dutch towns Sunday night caused by people protesting against the curfew. The violence came a day after anti-curfew rioters torched a coronavirus testing facility in the Dutch fishing village of Urk.
Orthodox Jews clash with police in Israel as some religious schools open in violation of lockdown. Clashes broke out and arrests were made in three Israeli cities as police moved in to shut down yeshiva religious schools that opened for students despite the coronavirus lockdown. In Jerusalem, water cannons were also deployed.
Anti-lockdown protesters in Denmark burn an effigy of PM, brawl with police. Crowds of black-clad protesters have taken to the streets, launching fireworks, torching an effigy of Prime Minister Mette Frederiksen, and clashing with cops. Hundreds of black-clad protesters clashed with police on the streets of Copenhagen on Saturday night, shooting fireworks at the officers and getting batons in return. Violent demonstrations have become a weekly occurrence in the Danish capital, where lockdown measures were extended at the beginning of the year and where the government recently clamped down further on the size of gatherings permitted. The group, calling themselves the ‘Men in Black’, torched an effigy of Danish Prime Minister Mette Frederiksen. By the end of the night, at least five people were arrested, Copenhagen police said on Twitter.
Tens of thousands of Pakistanis have held an anti-Israel march in the country’s major city of Karachi, rejecting the possibility of normalizing ties with the occupying Israeli regime. The "million-man march" organized by opposition Jamiat Ulema-i-Islam-Fazl (JUI-F) was held with participants donning the colours of the JUI-F and raising tall black and white striped flags. In recent months, the news of deals signed by a few Arab dictatorships to normalize diplomatic relations with Israel under intense US pressure has sparked widespread anger among Pakistani people, who hold strong feelings for the Palestinian cause according to the Iranian propaganda sight PressTV.
Boogaloo 2021
Front Page Headlines
at January 25, 2021

This whole thing with covid 19 is so fraudulent Im happy to see people are starting to clue in. For any of you doubters out there. Please go to you tube and type in "Covid 19 fraud exposed in New York hospital. Its only 23 min.so it won't take much of your time