Cyclone Gati is the strongest storm to hit Somalia since satellite records began bringing more than two years of rain in two days: The heavy rains and winds are expected to exasperate the locust problem in Somalia, Ethiopia, and Kenya 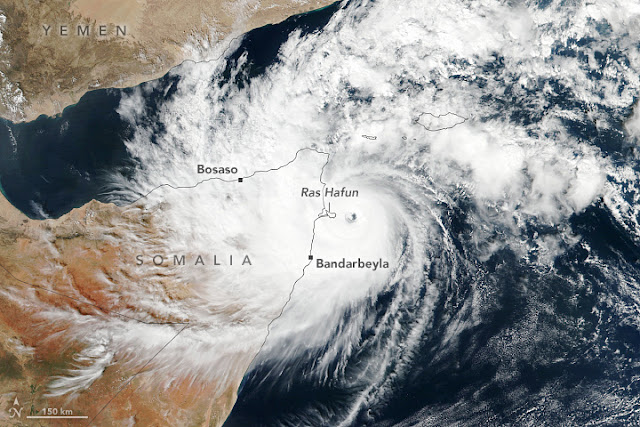 Cyclone Gati, the strongest storm to hit Somalia, has dumped two years' worth of rain in two days. Cyclone Gati is the strongest storm to hit the Horn of Africa nation since satellite records began - bringing two years of rain in two days and wind speeds of 170 kph (105 mph) to northeastern Somalia's Puntland region. The United Nations said eight people have died and 180,000 people have had their lives disrupted, with more than a dozen towns and villages inundated by floodwaters, which have destroyed homes and businesses and submerged crops and pastures.

Impoverished Somalia is one of the countries most vulnerable to climate change but it receives little climate adaptation funding, according to the International Federation of Red Cross and Red Crescent Societies. The country of 15 million often suffers prolonged droughts and flash floods - threatening people's livelihoods and worsening hunger amid the ongoing conflict between its Western-backed government and the Islamist militant group al Shabaab.

The U.N. Office for the Coordination of Humanitarian Affairs (UNOCHA) said on Wednesday Gati had weakened and was expected to dissipate in the coming hours, but had left "a trail of physical and economic damage". Close to 70,000 people - including fishermen, herders, farmers and traders - will need support to rebuild their livelihoods following the disaster, its latest bulletin said.

Northern Somalia usually gets about 10 cm (4 inches) of rain per year, but satellite images from NASA's Earth Observatory said Gati brought at least that much in two days. Cyclone Gati formed in the Indian Ocean and made landfall on the 22nd near Xaafuun and the northern tip of northeast Somalia. Bosaso reported 128 mm (more than 5 inches) in 24 hours and extensive damage was reported in Bari region.

Gati could impact current Desert Locust infestations in several ways. Heavy rains are likely to have fallen on the Somali plateau between Hargeisa and Garowe, which is north of current breeding in the Ogaden of eastern Somali region in Ethiopia and adjacent areas of central Somalia. Nevertheless, the rains would allow immature swarms still present near Hargeisa and Jijiga, Ethiopia to rapidly complete their maturation and lay eggs. 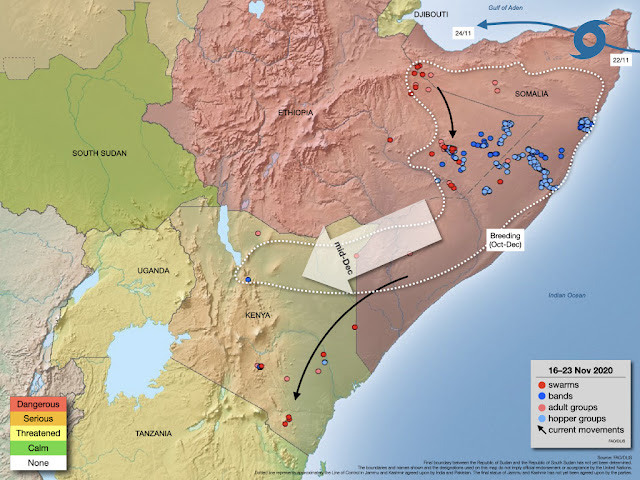 On the other hand, winds associated with the cyclone may have allowed these swarms to move southeast to the Ogaden where they would mature and lay eggs in current breeding areas. In either case, widespread breeding currently underway in eastern Ethiopia, central Somalia and perhaps southern Somalia, coupled with a potential expansion to northern Somalia, is expected to cause numerous immature swarms to start forming in early December and continue until the end of the year.

Many of these swarms will migrate to southern Ethiopia and southern Somalia, reaching northern Kenya by mid-December and continue thereafter. The potential scale of this migration could be substantial. Intensive survey and control operations should be increased in Ethiopia and Somalia while heightened vigilance and preparedness are called for in Kenya according to FAO.