More Crazy Crazy Crazy Weather: Denver's 74 deg F, warmest in almost 100 years drops to below freezing and 5 inches of snow in 24 hrs mirroring what happened in Tasmania in Australia on Friday 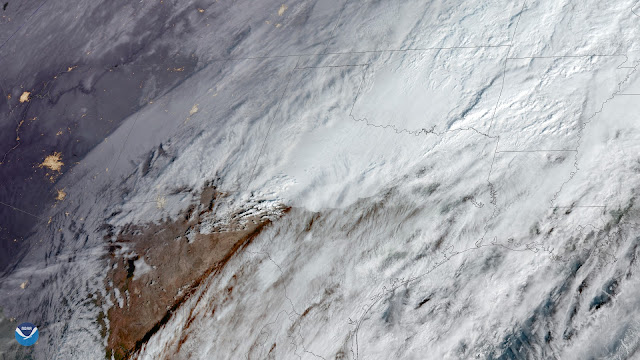 On Feb. 4, 2020, GOES-East captured this imagery of low-level stratus clouds as they moved across Texas behind a cold front, while higher cirrus clouds sped by above them. They are part of a large storm system that is spreading snow and ice from the southern Plains to the Midwest and is forecast to move toward the Northeast later this week.

Many parts of Europe have been enjoying summer temps in mid-winter in the last week with Puerto De La Cruz topping the list with a mighty, 30 deg C, (86 deg F) and Valencia hitting 29.4 deg C, (85 deg F) almost double the average temperatures for the time of the year, smashing the old record of 27 deg C, (80 deg F). The Big Wobble
Parts of the Salt Lake City metro saw more than a foot of snow on Monday, while the Denver metro saw freezing rain and two-to-five inches of snow as of Tuesday morning--after a high of 74 degrees Fahrenheit, (23 deg C). The last time it was that warm this time of year in Denver was 86 years ago.
Up to 10 inches of snow has been measured in Peacock, Texas, which is about 90 miles south-southeast of Lubbock. A couple inches of snowfall has fallen as far southwest as El Paso, Texas, where slick roads have been reported. Weather Channel


A family's Hobart holiday goes from 40C to snow in 24 hours Adrian Van Beek when his family decided to escape the hot Brisbane summer and take a holiday in Hobart but when they arrived, they were hit by opposite extremes. Hobart's temperatures spiked at 40C (104 deg F) last Friday, close to its hottest ever day of 41.8C in 2013. "On the first day, we'd planned to go up the mountain, but it was so hot that we couldn't," Mr Van Beek told Nine.com. The next day, Mr Van Beek and family set off to enjoy a cooler day only to get caught in major snowfall and temperatures of -1C (30 deg F), on Mount Wellington overlooking Hobart. "When we drove up we saw there was snow already on the trees and on the grass, and then this cloud just came over us and we couldn't see anything, it was completely white, and 10 minutes later it was snowing," he said. "We were able to pick up the snow and throw it at each other." 9News

Thank you for keeping an eye out for the craziness caused by (some) modern humans.

A lot to learn about engineering winter etc:
https://www.geoengineeringwatch.org/category/engineering-winter/