Aussie Bushfire Update No 25: "I would not be surprised that it’s wiped out every fish in at least 100 kilometres of the river,”: Wet period brings relief but fire debris to kill fish by the millions 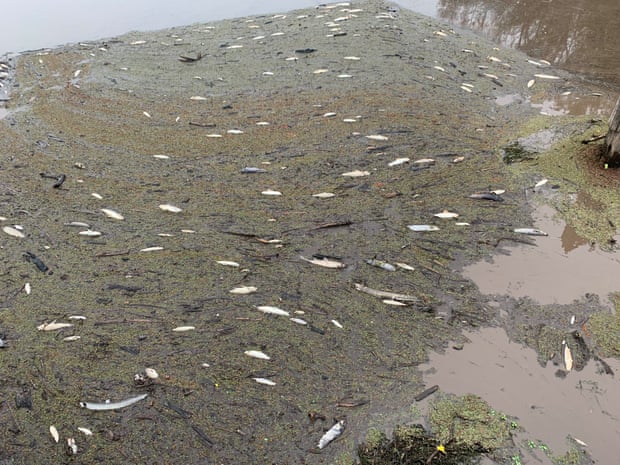 Results of a fish kill in the Macleay River in northern New South Wales, which locals said was like ‘cake mix’. Photograph: Larry Newberry

Hundreds of thousands of native fish are estimated to have died in northern New South Wales after rains washed ash and sludge from bushfires into the Macleay River. Heavy rain has hit New South Wales and Victoria today with their wettest 2 day period for months bringing much-needed humidity to the 2 states. However, flash flooding and very strong winds are expected to topple many fire-damaged trees causing landslides and blocking roads. Despite the rain, some bushfires remain out of control. Melbourne, Victoria's capital has been issued a severe weather warning for heavy rainfall, damaging winds and large hailstones, according to the ABC.

Although the rain is bringing much relief for people and animals alike the floods are bringing new disasters of their own. Ash, mud and fire debris are being swept into rivers which threaten the lives of millions of fish and freshwater wildlife.

Hundreds of thousands of native fish are estimated to have died in northern New South Wales after rains washed ash and sludge from bushfires into the Macleay River. Parts of the Macleay River – favoured by recreational fishers – have been turned into what locals described as “runny cake mix” that stank of rotting vegetation and dead fish. One freshwater ecologist told Guardian Australia the impact of the fish kill might be felt for decades to come, with long-lived species like Australian bass hit hard.
The disaster on the Macleay River is one of eight fish kills reported to the department this year, with the cause of most linked to lack of rainfall. Larry Newberry, a recreational fisher from Frederickton, near Kempsey, said he drove 100km to George’s Creek to survey the river last weekend. “I would say from what I’ve seen I would not be surprised that it’s wiped out every fish in at least 100 kilometres of the river,” he said. “The stench was overwhelming – it stank that much it made you heave. It’s the dead fish, the rotting vegetation and the ash from the fires and maybe the fire retardant. It is just like brown sludge. “I’ve been fishing the river for 50 years and I have seen fish kills before, but nothing of this magnitude. This will be happening in every east coast river that’s been hit by bushfires.”

The latest official count of dead wildlife during the fires has been quoted as 1 billion.