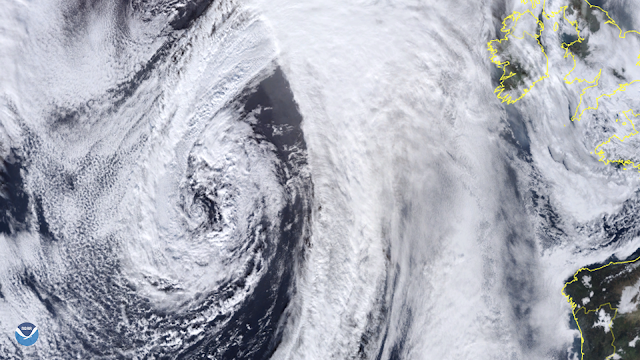 A large, broad cyclone has developed over the Norwegian and Greenland Seas captured by the NOAA-20 satellite on Jan. 1, 2020, and is expected to bring hurricane-force winds, heavy rainfall, and snow as it moves toward Scandinavia, mainly targeting Norway today.


The storm comes on the heels of a Norwegian heatwave which reached 66 degrees Fahrenheit (19 degrees Celsius) in the municipality of Sunndalsøra today, Jan. 2, 2020. This is the highest temperature on record measured in the month of January in the country, as well as the combined months of December, January, and February from previous years. Full Story

The image above shows the storm today, Jan. 2, 2020. The strongest wind gusts are expected on the coast of Nordfjord, Sunnmøre and in Romsdal. Additionally, blizzard conditions are expected in the mountains with wind gusts ranging from 55 to 74 mph due to cold air moving southwest from over the Norwegian Sea.