2020 begins with a bang! General Qassem Soleimani, commander of Iran’s (IRGC), and Abu Mahdi al-Muhandis, second-in-command of Iraq's (PMU), killed in US airstrikes as threat of war escalates 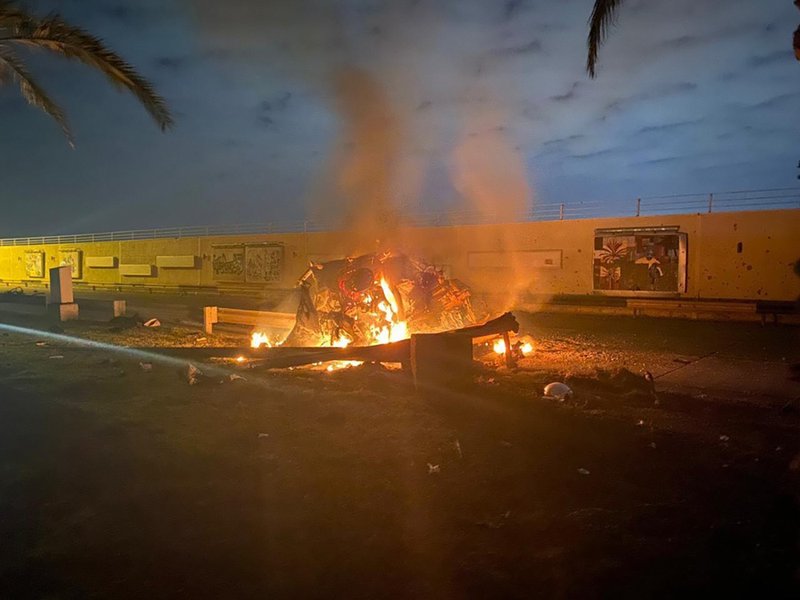 Major General Qassem Soleimani, the commander of the Quds Force of Iran’s Islamic Revolution Guards Corps (IRGC), and Abu Mahdi al-Muhandis, the second-in-command of Iraq's Popular Mobilization Units (PMU), have been killed in US airstrikes in the Iraqi capital Baghdad. The IRGC announced in a statement on Friday morning that Major General Soleimani and al-Muhandis were martyred in the attack carried out by US helicopters. The Iraqi pro-government group also confirmed the incident. "The deputy head of the Hashed, Abu Mahdi al-Muhandis, and head of the Quds Force, Qasem Soleimani, were killed in a US strike that targeted their car on the Baghdad International Airport road," it said in a statement on Friday. PressTV

‘Act of international terrorism’: Iran vows ‘vigorous revenge’ on the US after Quds Force chief killed in US airstrike.

Iranian Foreign Minister Mohammad Javad Zarif denounced a series of US airstrikes that killed the chief of the elite Quds Force, Qassem Soleimani, as international terrorism, warning the US of consequences of “rogue adventurism.” In a statement on Soleimani’s death, Iranian Supreme Leader Ali Khamenei warned that “revenge awaits the criminals who have stained their hands in his blood.” He promised that the airstrike will only “double” Tehran’s resistance against rivals in the region. Defense Minister Amir Hatami pledged to exact “a crushing revenge” for the death of Soleimani. “We will take revenge on all those involved and responsible for his assassination,” he said. Mohsen Rezaee, a member of a council that advises Khamenei and a retired major general in the Iran Revolutionary Guards Corps (IRGC), also sent out a tweet on Thursday night vowing swift retaliation for the assassination. “Martyr [#Qasem Soleimani]… joined his martyred brothers, but we will take vigorous revenge on America,” he said. A number of US airstrikes near Baghdad International Airport earlier on Thursday left Soleimani and several Iraqi militia leaders dead, with two other Iraqi commanders reportedly arrested by US Marines. The Pentagon later confirmed the strikes, stating they were “aimed at deterring future Iranian attack plans.” RT

Attack on US Embassy exposes widening US-Iraq divide on Iran

The New Year’s Eve attack on the U.S. Embassy compound in Baghdad has exposed a deepening divide between the United States and Iraq over Iran’s role there, even as the Pentagon embarks on a more aggressive mission to counter Iranian influence across the Mideast. “The game has changed,” Defense Secretary Mark Esper said Thursday, telling reporters that violent acts by Iran-backed Shiite militias in Iraq will be met with U.S. military force.
Esper spoke before Iraqi TV and three Iraqi officials said Friday that Gen. Qassem Soleimani, the head of Iran’s elite Quds Force, had been killed in an airstrike at Baghdad’s international airport. AP

The United States killed Iran’s top general and the architect of Tehran’s proxy wars in the Middle East in an airstrike at Baghdad’s international airport early on Friday, an attack that threatens to dramatically ratchet up tensions in the region. The targeted killing of Gen. Qassem Soleimani, the head of Iran’s elite Quds Force, could draw forceful Iranian retaliation against American interests in the region and spiral into a far larger conflict between the U.S. and Iran, endangering U.S. troops in Iraq, Syria and beyond. The Defense Department said it killed Soleimani because he “was actively developing plans to attack American diplomats and service members in Iraq and throughout the region.” It also accused Soleimani of approving the attacks on the U.S. Embassy in Baghdad earlier this week. Iran’s Supreme Leader Ayatollah Ali Khamenei warned that a “harsh retaliation is waiting” for the U.S. AP