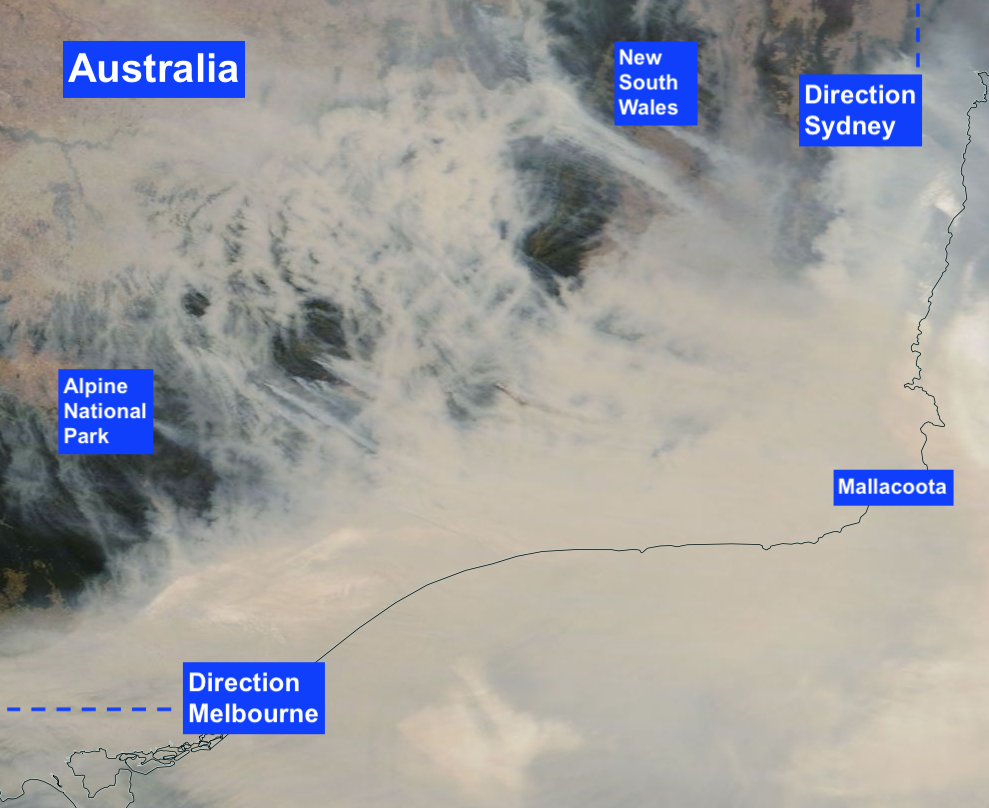 An area the size of Portugal is now ablaze across Victoria and New South Wales, credit NASA EarthView
Australia's bushfire crisis is so big that it's useless trying to predict how blazes will behave, the incident controller says!

Andy Gillham, from the Bairnsdale incident control team in Gippsland, Victoria, said in the coming days some communities would have fires approaching "from almost all directions". "Everybody's saying the same thing, and that is because the scientific modelling that we use to try and predict where the fire might run is not coping with what's happening in the landscape just purely because of the fire load," he told ABC Gippsland. Mr Gillham said as fires build, they create their own weather, so data from the weather bureau becomes less relevant. Fires exceeded human and computer predictions. NSW Rural Fire Service Commissioner Shane Fitzsimmons said the fires in New South Wales on New Year's Eve exceeded all predictions. "We saw extraordinary fire behaviour with fires, five of them, burning at the emergency warning alert level," he said at a press conference on Thursday. "Those fires exceeded all the manual predictions and all the computer-based predictions for what was to be the expected fire spread. ABC

Firefighters warn they may have to abandon homes, and even whole towns, as bushfire crisis threatens to overwhelm resources in New South Wales, Victoria and South Australia. Both NSW and Victoria have enacted emergency measures that give firefighting authorities the power to forcibly relocate people if necessary. In South Australia, warnings have been issued for two fires on Kangaroo Island, which firefighters have said they cannot prevent from spreading. SA country fire service chief officer Mark Jones said he would be “astonished” if homes were not already lost. Forecasters have predicted temperatures in the mid-40Cs on Saturday for some parts of south-east Australia. The fire danger will be increased by strong winds. Guardian

Unobscured by smoke, aerial footage taken with a thermal aerial video at Mallacoota on 31 December, at around 11pm shows the extent of the bushfire front in the East Gippsland area. The deadly fires have burnt through more than 766,000 hectares across Victoria. There are 47 fires currently going statewide, mostly in East Gippsland.