2019 was the 2nd wettest year on record for the U.S. They also experienced 14 billion-dollar weather and climate payout: Was officially the worst agricultural disaster in modern day history 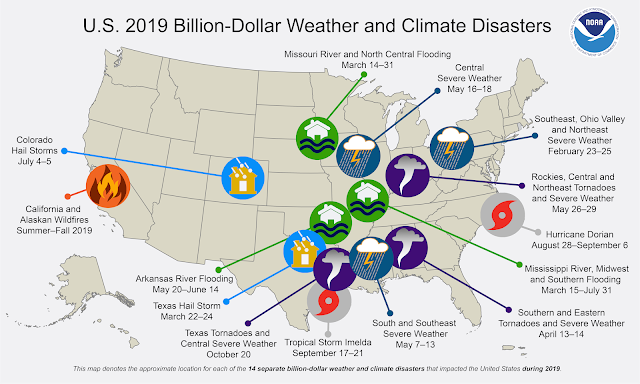 This U.S. map shows the locations of all 14 billion-dollar disasters that happened across the country in 2019. Credit NOAA, click on image to enlarge

2019 is now officially the worst agricultural disaster in modern American history with catastrophic flooding the whole year bringing NOAA to declare "2019 was the 2nd wettest year on record for the U.S."
The US is experienced unprecedented and catastrophic flooding, the rains started in the winter and went right through the summer into autumn. More than 90% of the upper midwest and great planes were still covered by nearly 11 inches of snow well into May. That meant the US transformed from one of the worst winters in modern history into a flood season that took an apocalyptic turn for farmers across the US. Millions of acres of farmland stayed drenched and unfit for planting meaning thousands of farmers did not plant crops this summer, with thousands of more financially ruined by the floods and will never return to farming again.

2019 was the 2nd wettest year on record for the U.S. The nation also experienced 14 billion-dollar weather and climate disasters last year.


It was another year of record-making weather and climate for the U.S. in 2019, which was the second wettest behind 1973.
Warmer-than-average temperatures were felt by much of the country including Alaska, which logged its hottest year on record.
Alaska also experienced destructive wildfires that, when combined with those in California, caused damages in excess of $1 billion. Thirteen other billion-dollar disasters that struck the U.S. last year included Hurricane Dorian, historic flooding and severe storms.
Here’s a recap of the climate and extreme weather events across the U.S.in 2019:

Precipitation across the contiguous U.S. totalled 34.78 inches (4.48 inches above the long-term average), ranking 2019 as the second-wettest year on record after 1973, according to scientists from NOAA’s National Centers for Environmental Information.
By year’s end, 11 per cent of the contiguous U.S. was in drought. In April, drought conditions had reached a low of 2.3 per cent, the smallest drought footprint in the 20-year history of the U.S. Drought Monitor.
The average temperature measured across the contiguous U.S. in 2019 was 52.7 degrees F (0.7 of a degree above the 20th-century average), placing 2019 in the warmest third of the 125-year period. Despite the warmth, it was still the coolest year across the Lower 48 states since 2014.
There were some standouts in 2019, including Alaska, which had its hottest year ever recorded — 6.2 degrees F warmer than the long-term average. Georgia and North Carolina also saw their hottest year on record, while Michigan, Minnesota, North Dakota, South Dakota and Wisconsin each had their wettest year ever recorded. Billion-dollar disasters in 2019
Last year, the U.S. experienced 14 weather and climate disasters with losses exceeding $1 billion each and totalling approximately $45 billion. At least 44 people died and many more were injured during the course of these disasters that included:
The extreme weather with the most widespread impact was the historically persistent and destructive U.S. flooding across more than 15 states. The combined cost of just the Missouri, Arkansas and Mississippi River basin flooding ($20 billion) was almost half of the U.S. cost total in 2019.